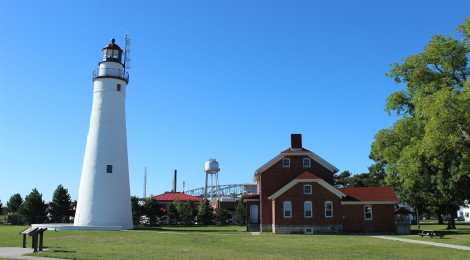 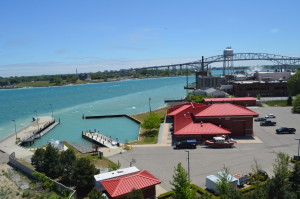 The Fort Gratiot Lighthouse in Port Huron is Michigan’s oldest lighthouse (so old that it pre-dates Michigan becoming a state), dating back to 1829. It has been and still is an important beacon for shipping traffic, as it marks the point where Lake Huron and the St. Clair River meet. All vessel traffic heading to Lake Huron, Lake Michigan, and Lake Superior from the Lower Great Lakes must pass this point, and navigation can be difficult. The first lighthouse in this area was constructed in 1825, but it was damaged in an 1828 storm and later fell down. The current structure was constructed in 1829, though it took a few additions to the tower over the years to get it to its current height (85 feet). 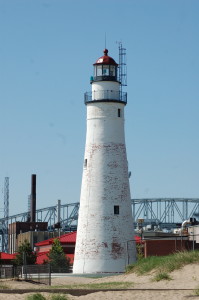 Today the Port Huron Museum offers tours of the Fort Gratiot Lighthouse and grounds, including the chance to climb the tower. From the tower you will be able to see the lighthouse grounds, Coast Guard station, the Bluewater Bridge, the shoreline of Point Edward, Ontario, Canada, and more. Find out more at https://www.phmuseum.org/fort-gratiot-lighthouse/. In addition to the lighthouse, other buildings here include a hospital, fog signal building, two keeper’s dwellings, and several old Coast Guard buildings. Many informational plaques tell of the lighthouse’s history and allow for a self-guided tour of the grounds. A gift shop is located inside the old garage building near the parking area. There is a public park and beach located just north of the lighthouse. We have visited this lighthouse many times over the years, and have enjoyed seeing the progress made on opening this historic site back up to the public. The photos featured in this gallery are from a trip to Fort Gratiot in June of 2018. 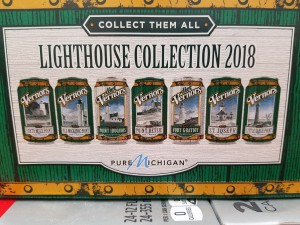 In 2018 the Fort Gratiot Lighthouse was one of eight Michigan lighthouses featured on cans of Vernors and Diet Vernors ginger ale.