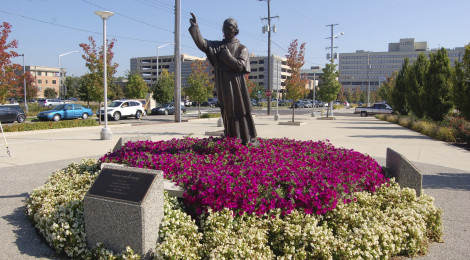 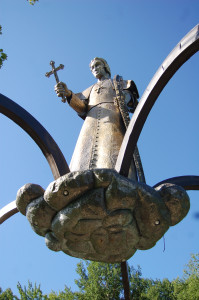 With most of Michigan covered in a blanket of snow and some Keweenaw and Upper Peninsula locations digging out from a snowstorm that dumped several feet of snow, it is a great time to look at the history of a missionary who was undeterred by the elements. Bishop Frederic Baraga was known as the “Snowshoe Priest” for his tireless efforts to make the trip between his missions regardless of how much snow was on the ground. 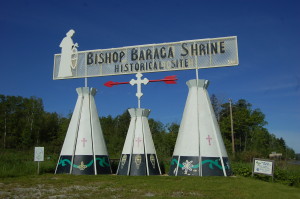 Born in Slovenia, Baraga came to Michigan in 1831 and quickly became an expert on the Ottawa language. He spent time in Arbre Croche (Cross Village), Grand Rapids, La Pointe (Wisconsin) and founded a mission at L’Anse. He was made a bishop in 1853 and served at Sault Ste. Marie and Marquette before his death in 1868. Baraga was declared venerable in 2012 – more information on his case for canonization can be found on the Diocese of Marquette website.

Today it is easy to see the legacy left behind by Baraga across the state of Michigan. In the Upper Peninsula a city, county and state park bear his name and there is an impressive shrine overlooking the Keweenaw Bay in L’Anse. High schools in Iron Mountain and Cheboygan also bear his name, and churches, homes, missions and statues also represent places where he spent time or had a significant impact. We put together a list of some of the easy-to-visit sites in Michigan that are directly tied to the history of the Snowshoe Priest Bishop Frederic Baraga. 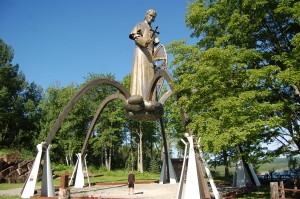 Assinins – This historic district features the remains of a mission that was founded by Baraga in the 1840s. It provided an important link between the Catholic missionaries and the Chippewa and Ottawa people, and was one of Baraga’s first missions. It was also where he stayed while writing some of his most important works, including a Chippewa dictionary and a book on Chippewa grammar. Today the surviving structures include a school, an orphanage (ruins) and a cemetery (where several missionaries are buried). The statue shown above sits in front of a church that still holds services.

Old US-41 north of Baraga 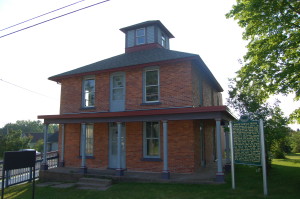 Baraga House, Marquette – This was the bishop’s home in the latter years of his life, and according to the historical marker here, he “lived in a part of this house that was later moved from behind the cathedral and attached to an existing house on this site. He continued working with native people and helped them connect annuity from the U.S. government. Baraga died in this house on January 19, 1868, and was interred in the crypt of St. Peter Cathedral in Marquette.”

St. Peter Cathedral, Marquette – Any Baraga pilgrimage would be incomplete without a stop at this Marquette church, where the remains of the venerable Bishop are located in the crypt. Baraga dedicated this church in 1866, and served here for two years before his death. According to the Diocese of Marquette, “In 1897 a crypt with six niches was built in the southwest corner of the new sandstone Cathedral after the fire in 1879. Bishop Baraga’s body was lifted into a steel casket and placed in the lower tier at the southeast corner of the crypt. When fire again destroyed the Cathedral in 1935, a Bishop’s Chapel was added to the restored Cathedral. A decision was made at this time to excavate the space under the chapel and build a crypt there. A distinct place of honor would be reserved for the body of Bishop Baraga. The remains of Bishops Mrak, Vertin, Eis, Magner and Noa also lie in the crypt. The crypt has two rooms. As you enter the first room, there is an altar honoring Bishop Baraga and prayer cards. In the second room are the burial vaults with a place to kneel and pray.” 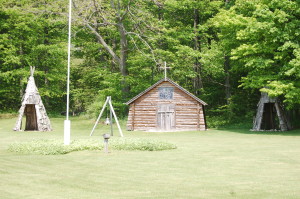 Baraga’s First Church, Indian Lake – “Near this site, on May 15, 1832, the Rt. Rev. Frederic Baraga, then a young Catholic missionary to the Indians, established and blessed his first church. A small building of logs and bark, it was built with the willing help of the Indians and dedicated ‘to the honor of God under the name and patronage of his Virginal Mother Mary.'” This site is also an Indian burial ground and the current structures were constructed in careful historical detail in the 1980s. 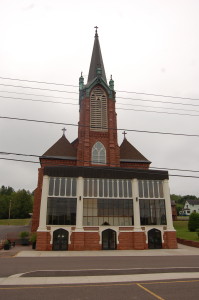 St. Ignatius Loyola Church, Houghton – Baraga dedicated this church in the 1850s, and the historic marker here reads: “The roots of the Catholic Church in the Portage Lake area are associated with Bishop Frederic Baraga, the “Snowshoe Priest,” who dedicated the original St. Ignatius Loyola Church on July 31, 1859. Before the erection of that building, Catholics in Houghton worshipped in a boarding house and later a school. The present structure was completed in 1902, after four years of construction, under the direction of Father Ivan Rezek. Father (later Monsignor) Rezek came as pastor in 1895 and remained in that position for fifty-one years. One of the most imposing edifices in Houghton, St. Ignatius Loyola Church features rockfaced sandstone facades. Beautiful stained glass windows and an elaborate Gothic altar adorn the breathtaking interior.” 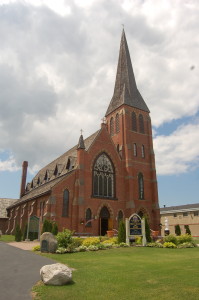 St. Mary’s Pro-Cathedral, Sault Ste. Marie – This beautiful church in Michigan’s oldest city is home to Baraga artifacts that include books he authored and snowshoes and furniture he used. The historical marker in front of St. Mary’s adds even more information: “In 1853, Pope Pius IX separated the Upper Peninsula from the Diocese of Detroit and established a vicariate apostolic. Reverend Frederic Baraga, a missionary from L’Anse, became vicar apostolic and made St. Mary’s Church his headquarters. In 1857 the vicariate became a diocese, Baraga was named “Bishop of the Sault” and the log cabin known as St. Mary’s became a cathedral. With the onset of mining, settlements sprang up in the western Upper Peninsula. Faced with the task of serving these remote parishes, Bishop Baraga obtained the pope’s permission to move the seat to the diocese to Marquette. In May 1866, Baraga left St. Mary’s and the parish became the pro-cathedral parish. In 1881 the present Gothic Revival-style church, designed by Joseph Connolly of Toronto, was erected.” 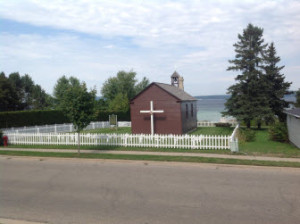 St. Francis Solanus Indian Mission, Petoskey – A Michigan historical marker was placed here last year, at a mission that Baraga blessed and dedicated in 1860. “Mass was offered at least four times a year. The mission was restored in 1884 after the arrival of Father Pius Niermann, an Assistant Priest with the Franciscan Fathers. It was abandoned by 1896 and restored again in 1931, 1959 and from 2005 -2008. The church and burial grounds are listed on the National Register of Historic Places.” 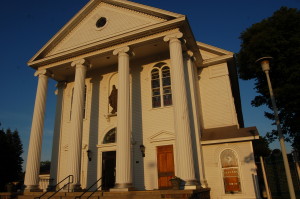 St. Mary’s Church, Cheboygan – The St. Mary’s congregation has history dating back to 1852, and Baraga conducted its first confirmation in 1862. This building was constructed in 1870 and it is one of Cheboygan’s oldest and most historic buildings. 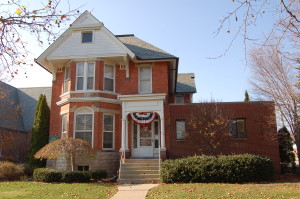 St. Mary’s Rectory, Saint Clair – “This picturesque red brick, Queene Anne-style structure was erected as a residence and office for St. Mary’s parish priests in 1886, during the pastorate of Father C.M.B. Schenkelberg. The rectory archives contain the complete sacramental records of all the early Catholic missionaries in the area, including those of Father Frederic Baraga.” Located next door to the stunning St. Mary’s Church, this is an important collection of Baraga’s historical records. 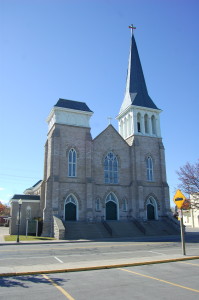 St. Bernard Catholic Church, Alpena – According to the Michigan historical marker on site, “In 1861, Bishop Frederic Baraga (1797-1868) trod through snow and icy waters from Sault Ste. Marie to Alpena where he founded a Catholic church.” Nearly two decades later this building was built; it is the oldest Catholic parish between Bay City and Cheboygan. It is also one of four Catholic churches in Alpena that were recently merged together (St. Anne, St. John the Baptist and St. Mary, the Immaculate Conception). 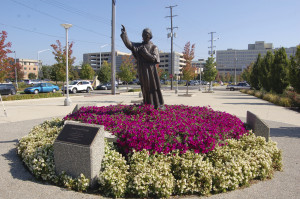 Bishop Baraga Statue, Grand Rapids – This 7.5 foot bronze statue was added to the Grand Rapids Community Legends Project in 2012. It was sculpted by Jay Hall Carpenter and honors Baraga’s work in the area near the Grand River in the 1830s. It is located in Cathedral Square facing the Cathedral of St. Andrew. The Bishop Baraga Bookstore can be found at 360 S. Division. 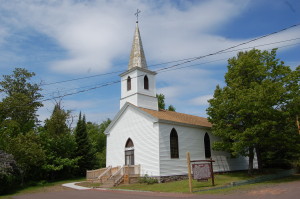 Holy Redeemer Church, Eagle Harbor – This church was founded in 1847 and built in 1854. The wooden sign out front notes that “Jan. 11, 1847 was the day when the first priest visited Keweenaw County in the person of Father Baraga. Mass was said there for the first time in the John Kerry home at Eagle River in May of the same year. A second trip was made to the area by Baraga who then established a regular route to serve the many mines from Cliff to Copper Harbor. Twice a year did he call and when necessity demanded – a service he continued until he became bishop in 1853. In 1854 he ordained Rev. H. I. Thiele and sent him to Eagle Harbor where as pastor he was responsible for building this church. 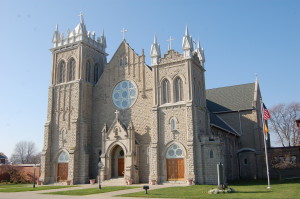 Holy Cross Parish, Marine City – This stunning church in Marine City has history dating back to 1825, and according to its Michigan historical marker: “Among former pastors of Holy Cross Parish, in addition to Father Gabriel Richard, were the saintly missionary Bishop Frederic Baraga, and a pioneer priest of St. Clair, Father Lawrence Kilroy. Holy Cross Parish has remained in continuous use and service to the people for over 150 years.” 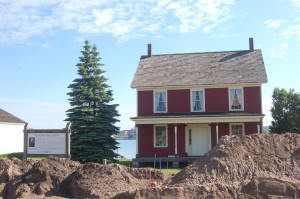 Bishop Frederic Baraga House, Sault Ste. Marie – After Baraga was named Bishop of Upper Michigan he resided in this home in Sault Ste. Marie. After he left for Marquette, this building was used as a Catholic school and a residence. It was moved to its current location in 1986, where it sits next to the John Johnston Home, Henry Rowe Schoolcraft’s Elmwood residence and the Kemp Coal Dock Office and Museum. It is open for tours, for more information head to http://www.saultcity.com/domain/97. 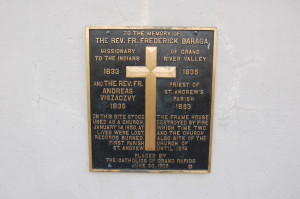 Baraga Plaque, Grand Rapids – This plaque commemorates the location of “the frame house used as a church, destroyed by fire January 14, 1850, at which time two lives were lost and the church records burned. Also site of the first parish church of St. Andrew until 1874.” It pre-dated the founding of Grand Rapids by three years and Michigan’s statehood by four years.