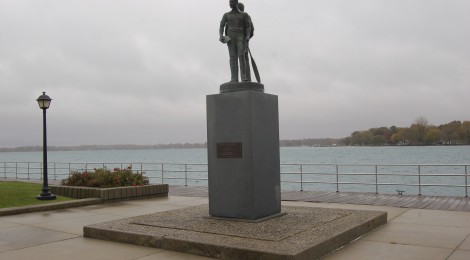 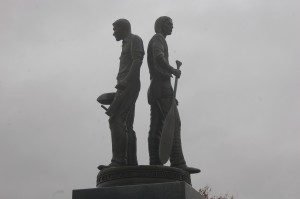 The Spirit of Algonac is a seven foot tall sculpture by Alexander Buchan that can be found in Algonac, Michigan where it has stood since it was dedicated in 1989. This bronze sculpture sits alongside the St. Clair River in Algonac City Park. This half-mile long boardwalk provides unobstructed views of the river and this tribute to Chris-Craft, Gar Wood, and the native Chippewa Indians. The seven foot tall figures are of a Native American on one side (holding a canoe paddle) and a young boat builder on the other. 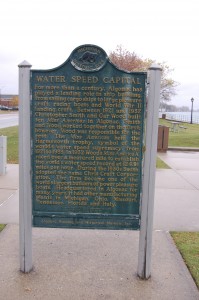 A Michigan historical marker next to the sculpture gives more background history on the Algonac area and its connection to the boating industry:

For more than a century, Algonac has played a leading role in ship building, from sailing cargo ships to large pleasure craft, racing boats and World War II landing craft. Between 1921 and 1932 Christopher Smith and Gar Wood built ten Miss Americas in Algonac. Smith and Wood worked together on the first; however, Wood was responsible for the rest. The Miss Americas held the Harmsworth trophy, symbol of the world’s water speed supremacy, from 1921 to 1933. In 1932 Wood’s Miss America X raced over a measured mile to establish the world’s water speed record of 124.91 miles per hour. During the 1930s Smith adopted the name Chris Craft Corporation. The firm became one of the world’s largest builders of power pleasure boats. Headquartered in Algonac for many years, it had other manufacturing plants in Michigan, Ohio, Missouri, Tennessee, Florida and Italy. 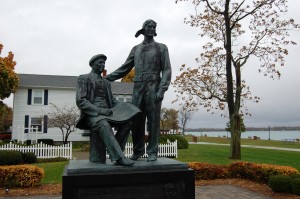 There is another, smaller monument to Smith and Wood located next to the Algonac Clay Historic Museum at 1240 St. Clair River Dr. That piece is called Legends of Algonac and was sculpted by Sergei Mitrofanov and was placed in 2010. Plaques were added in 2012, and you can find out more about the project at http://www.legendsofalgonac.com/.