The partnership between Pure Michigan and Vernors expands into 2019 to feature more Michigan lighthouses on the popular ginger ale cans. Vernors traces its history back to Detroit in the 1860s and is a Michigan staple, now owned by Dr. Pepper Snapple Group. 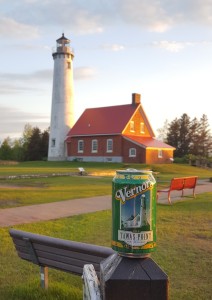 This partnership began in 2017 featuring images of five Michigan lighthouses on Vernors cans. Those lighthouse were:

Vernors Can at Crisp Point Lighthouse

In 2018, the Vernors Michigan lighthouse cans returned with seven cans in the series. The featured lighthouses were: 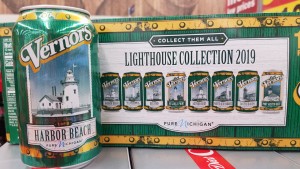 Listed below are the lighthouses that are featured on the 2019 Vernors Michigan Lighthouse cans. Nearby city and Great Lake are also listed along with photos and links where relevant. 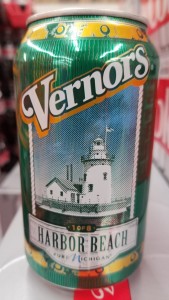 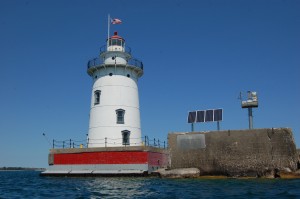 Harbor Beach lighthouse quickly became one of our favorite Lake Huron lighthouses after making the short kayak trip out to get up close photos of this sparkplug lighthouse. While we brought our own kayaks for this trip, we would recommend the folks at Harbor Beach Kayak, where you can rent kayaks and stand-up paddleboards to make a trip to the lighthouse and past several shipwrecks in the area. 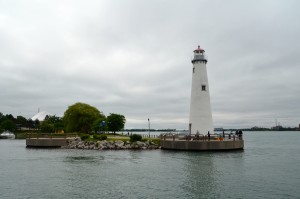 The Tri-Centennial State Park Light is one of the newest lighthouses in Michigan. This lighthouse, which resembles Tawas Point Lighthouse, was built to celebrate the 300th birthday of Detroit. 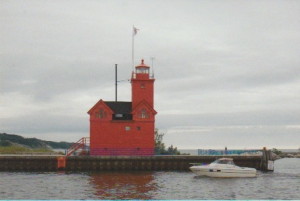 The Big Red lighthouse in Holland is one of the most recognizable lighthouses, especially to those in West Michigan.

Au Sable Point Lighthouse is part of the Pictured Rocks National Lakeshore, which remains one of the most popular tourist destinations in the Upper Peninsula. A 1.5 mile hike can take visitors out to this lighthouse. Along the way, you can see several shipwrecks in the water and along the beach. 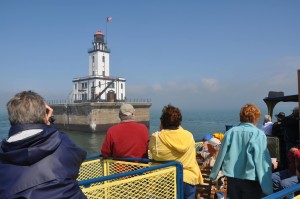 The Detour Reef lighthouse is one of the many Michigan lighthouses you can stay at. This lighthouse is located in a remote region of Lake Huron in the Upper Peninsula. Be sure to check out their overnight keeper program. 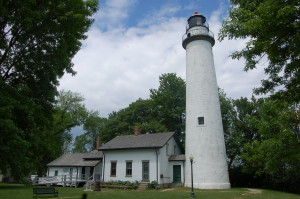 The Pointe Aux Barques Lighthouse dates back to the 1850s and is one of several lighthouses in Michigan’s thumb region that helped guide ships around shallow water.

This popular West Michigan lighthouse is one of only a few to still have an attached catwalk, which was a necessary item for lighthouse keepers to get to the light when waves were high. 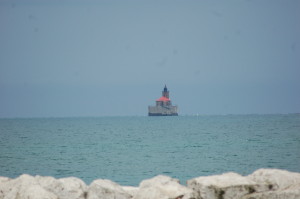 The Port Austin Reef is one of several Michigan lighthouses that is undergoing preservation efforts. You can find out more and about ways to visit the lighthouse here. The lighthouse is also visible from Veterans Waterfront Park with a short walk to the end of the breakwater.

The Au Sable Point and Port Austin Reef lighthouses are featured on Diet Vernors cans. The other six are featured on regular Vernors cans. The cans come in 12 packs of Vernors or Diet Vernors. Each 12 pack features the same lighthouse on every can, meaning you will have to get multiple 12 packs to complete the set or find someone to trade with. If the 2019 Vernors Michigan Lighthouse cans follow other years, they will be available in stores from mid-July to October. No word on if the cans will be available outside of Michigan. 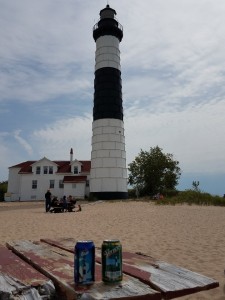 We are already looking forward to collecting the whole set and taking pictures of the Vernors Michigan lighthouse cans at their respective lighthouses. If you would like more information on viewing Michigan lighthouses, be sure to check out our road trip guides for the Lower Peninsula and Upper Peninsula. Each guide features maps, some directions, and guides to the lighthouses and area attractions.