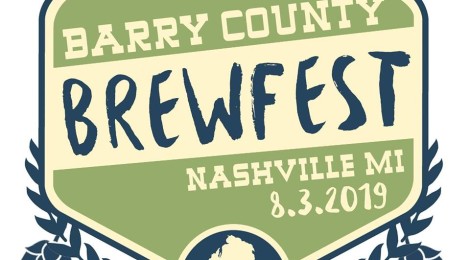 Tickets for the Barry County Brewfest are only $15 if bought before the event or $20 if purchased at the door. You can buy tickets here. Each ticket comes with a commemorative sampling glass and five tasting tickets. Additional tastings tickets ($1 each) can be purchased at the event, which at this price is a no brainer.

The 2019 Barry County Brewfest will be held from 2pm to 8pm in Nashville. This follows the trend of hosting the event in a different community each year. The prior hosts were Middleville, Freeport, and Delton. The event this year coincides with celebrating Nashville’s Sesquicentennial. If you get to Nashville early, you can see a parade at noon and even partake in a Guinness World Record attempt for the World’s Longest Kickline, which coincides with the city’s Get Your Kicks on M-66 business tagline. This year’s featured musicians will be Meridian, a local band from Barry County, performing 2:30 to 4:30 and Nathan Douglas, Kalamazoo based singer, performing 5pm to 7pm. There will not be a Beard Derby at this year’s event. 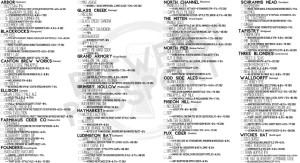 A look at the beer list (click photo above to enlarge) for this event shows many great options across different styles of drinks. The list includes one of the largest names in the state (Founder’s), local options (Walldorff, Glass Creek, Grimsby Hollow), and some newer lesser known names (Three Blondes, North Channel). The list also includes beer, wine, cider, mead, and even craft cocktails.

This will be our fourth time attending the event. You can check out our reviews from 2018, 2017, and 2016. The beer list can be overwhelming with many different options, so we will try and provide a guide of good places to start and some options to try. 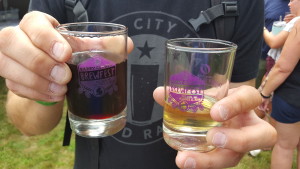 Last year, the first place we headed was Schramm’s Mead. One of the nation’s top-rated mead producers will be back for a second year, offering festival-goers the chance to try samples of mead including The Statement (one of the highest-rated meads in the country). We loved all three offerings Schramm’s had last year, and look forward to a 2019 lineup that includes four options. Last year, Schramm’s Ginger was number one on both Chris and Jon’s top five list from the event. The Statement was also included on Chris’s top five. Seriously, the meads are that good, and this is coming from someone who had never tried mead before. Now we have to tell you that the samples from Schramm’s cost two tasting tickets each instead of the usual one. While this seems like a lot, it is a huge bargain and you will be hard pressed to find Schramm’s items at many other brewfests. Also, keep in mind that last year’s event ran out of samples from Schramm’s as it was that popular, so make this one of your first stops. 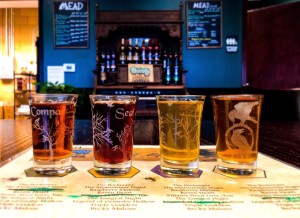 Mead at Grimsby Hollow in Middleville

Grimsby Hollow Meadery – Grimsby Hollow Meadery, the first mead taproom in Barry County, recently held its grand opening. Head to their booth to try great offerings like Raspberry Malone and The Beekeeper. Barry County Chamber of Commerce President Travis Alden told us, “Their space is really cool and their mead is excellent. Businesses like this are destinations and help to put communities on the map.” Alden also added that “Middleville is essentially the front door to Barry County from the North, and Grimsby Hollow will certainly add to that.” 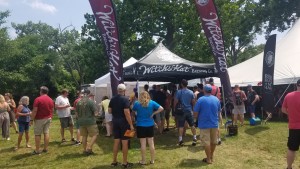 North Channel Brewing – We have yet to make it to this newer brewery in Manistee, and are pretty excited to try some of their beers at the festival. Their Manistee’s IPA sounds delicious! 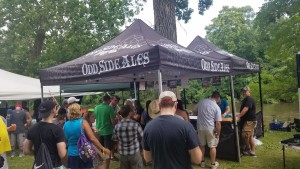 Odd Side Ales – Anyone who knows Odd Side Ales is familiar with their experimenting with weird flavor combinations that somehow turn into awesome beers. The Pineapple Hop Milk IPA sounds like a lot of fun, and they’ll have their classic Bean Flicker (blonde ale with coffee).

Blackrocks Brewery – One of our favorite Upper Peninsula breweries will have four beers ready to pour this year: MYKISS IPA, Presque Ale, Honey Lav, and Classic Pilsner. There’s something for everyone at this brewery, be sure to check them out!

Glass Creek – This local offering carries several different drink options like wine, cider, and beer. We have always been impressed with their offerings. The first year, we only tried their wine. Two years ago it was their beers that really impressed us. This year we are looking forward to trying their Apple Pie Hard Cider and beers. 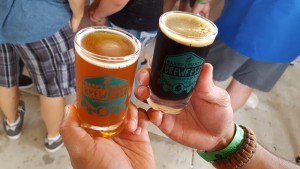 Arbor Brewing – Arbor was at the first Barry County Brewfest and returns with some great options. I was a fan of the lighter tastings Strawberry Blonde Ale and am looking forward to their Cucumber Lime Gose. 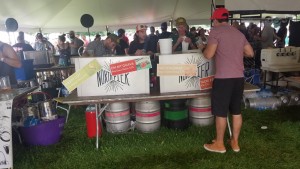 North Pier – The 2017 Barry County Brewfest was our first experience with North Pier beer and we can’t wait to try more offerings from them. This year’s offerings from North Pier include several craft cocktails, which have become very popular in the market. We are looking forward to trying them. We recommend their Oh My Guava, a Kolsch, which is a harder style to find at big events.

Last year’s most popular option was the samples from Schramm’s Meadery. Several other beer samples completely ran out before the event was over. Two of those beers are back and we would recommend trying them as early as possible. Pigeon Hill will once again have their OCP for samples, which tastes like an oatmeal cream pie and has been incredibly popular. Grand Armory’s Blurred Limes, a cream ale with limes, also ran out at last year’s event. 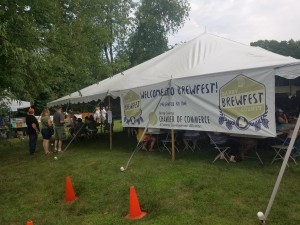 We recently spoke to event planner and Barry County Chamber of Commerce President Travis Alden. Expectations for this year are very similar to the event held in Delton last year. Alden is hoping to pull in some residents from Eaton County, since the Nashville hosted event is on the east side of Barry County. The layout of this event is said to be similar to last year, with plenty of space to spread out. Alden also says the tables with samples will be setup in a “horseshoe” bar setup like last year. These two items come directly from attendee feedback. I have to agree with this as last year’s event offered plenty of space to hang out with friends and enjoy the weather (when it didn’t rain).

When asked what beers and breweries he was most excited about, Alden provided some insight. Although you will likely see Alden in the background on Saturday providing help as needed and making sure this great event goes off without a hitch, he is hoping to get to try some newer options. He offered up Canton Brew Works, a new to the event, Three Blondes, a newer brewery in Michigan, and North Channel, which is from Manistee where Alden spent seven years of his life. Alden is also especially poud that there are three local entities this year, a brewery, a winery, and a meadery.

Alden told us “The number one goal of Brewfest was to be a catalyst to attract visitors to local communities.” This year’s event in Nashville coincides with a sesquicentennial, which is a huge deal for small town like this. If you have extra time on Saturday, please consider getting their early to take part in the local events being held like the parade. Also consider supporting some of the local businesses during the weekend.