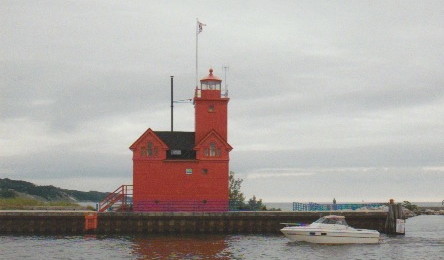 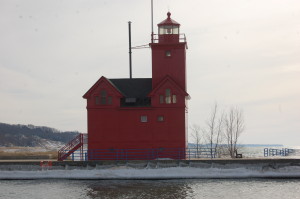 Our Lake Michigan shoreline is home to more than 20 unique and beautiful lighthouses, but few are as iconic as the Holland Harbor Lighthouse, know to many as “Big Red.” Red is a popular pain scheme for many of the lights in the area – South Haven, Grand Haven, Muskegon and Charlevoix are a few of the others that share that color – but the lighthouse at Holland Harbor distinguishes itself with its architecture. A square building with gabled roofs and a square tower that reaches 32 feet. This structure was constructed in 1907 and replaced several earlier structures at or near this site. 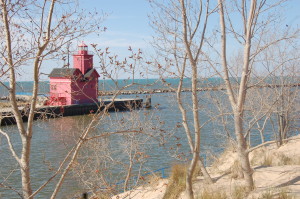 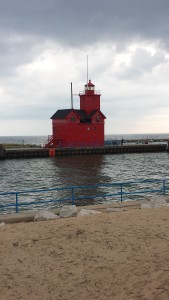 The light guides the channel connecting Lake Macatawa with Lake Michigan, a popular route for pleasure craft in the summer months. In 1987, the lighthouse was honored with a Michigan historical marker, which highlights the history of the light and tells how the harbor was made on its opposite side. “The first lighthouse built at this location was a small, square wooden structure erected in 1872. In 1880 the lighthouse service installed a new light atop a metal pole in a protective cage. The oil lantern was lowered by pulleys for service. At the turn of the century a steel tower was built for the light, and in 1907 the present structure was erected. Named the Holland Harbor South Pierhead Lighthouse, it has a gabled roof that reflects the Dutch influence in the area. The lighthouse, popularly referred to as “Big Red,” was automated in 1932. When the U. S. Coast Guard recommended that it be abandoned in 1970, citizens circulated petitions to rescue it. The Holland Harbor Lighthouse Historical Commission was then organized to preserve and restore this landmark.” 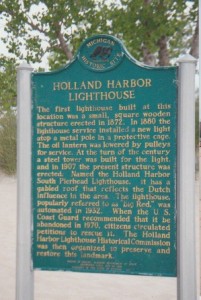 The beach here at the state park is an incredibly popular spot for summer recreation, thanks to the relatively warm waters for swimming and the plentiful sand for the beach and nearby dunes. The light can be seen from the parking lot, and a short walk on the pier provides closer views. 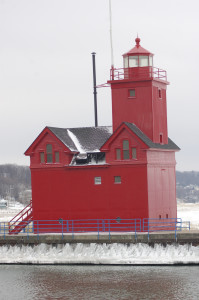 We’ve found this area to also be a fun place to visit in the winter, as the lighthouse stands out even more against the snow and ice. It is important to use caution when walking near the lighthouse or pier in these conditions, but the resulting photos can be pretty spectacular. 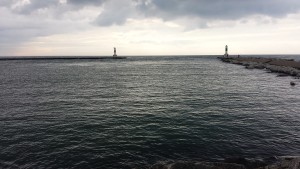 Access by foot to the lighthouse from the south side is possible, but somewhat restricted as it involves passing by private property. There are four parking spots off of South Shore Drive, and access is usually restricted to Tuesday and Thursday for Michigan residents (with less stringent rules for out of state visitors). More information can be found at http://bigredlighthouse.com/. In recent years, the historical commission has also offered tours of the lighthouse, with times and dates announced infrequently. 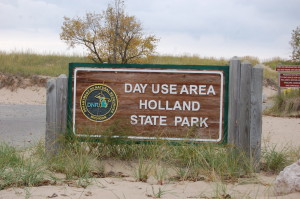 To get to the north side access via Holland State Park: from US-31, follow the brown state park signs and turn onto Lakewood Blvd. heading west. From there follow the road as it changes to Douglas Ave. and then Ottawa Beach Rd., which goes for a little over 4 miles (passing the state park campground) to its end at the state park – a Michigan recreation passport is required for entry.