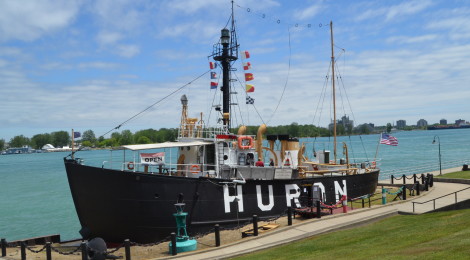 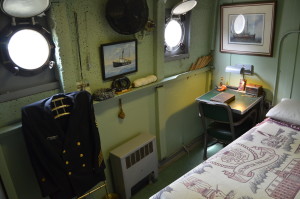 Michigan is known for being home to more lighthouses than any other state, but it is also home to the only surviving Great Lakes lightship – the Huron Lightship Museum in Port Huron. Lightships were used in places where it was too hard or too expensive to build a lighthouse. There was a lightship stationed at Waugoshance Shoal before a lighthouse was constructed, several lightships manned Corsica Shoals (a sandy area near Port Huron), and the lightship Buffalo served on Lake Erie. At one time there were 10 of these vessels on the lakes, now only the Huron remains. It is now open as a museum run by the Port Huron Museum (https://www.phmuseum.org/huron-lightship/). We had a chance to tour this historic ship in June and would like to share a few of our photographs from that visit. 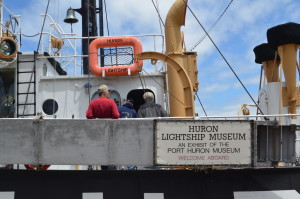 The Michigan historical marker in Pine Grove Park near the Huron tells us a bit more about the service history of the ship: “Commissioned in 1921, the Huron began service as a relief vessel for other Great Lakes lightships. She is ninety-seven feet long, twenty-four feet in beam, and carried a crew of eleven. On clear nights her beacon could be seen for fourteen miles. After serving in northern Lake Michigan, the Huron was assigned to the Corsica Shoals in 1935. These shallow waters, six miles north of Port Huron, were the scene of frequent groundings by lake freighters in the late nineteenth century. A lightship station had been established there in 1893, since the manned ships were more reliable than lighted buoys. After 1940 the Huron was the only lightship on the Great Lakes. Retired from Coast Guard Service in 1970, she was presented to the City of Port Huron in 1971.” 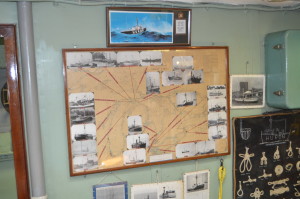 Interior exhibits include restored crew quarters, displays about other lightships, nautical artifacts, the radio room, and more. Some highlights for us were being able to walk around on the top deck for a different view of the Black River and its landmarks, thinking about how tight things could get while living and working on the ship, and seeing the engine room. This was a fun and unique museum that we would definitely recommend – the whole family should love it!