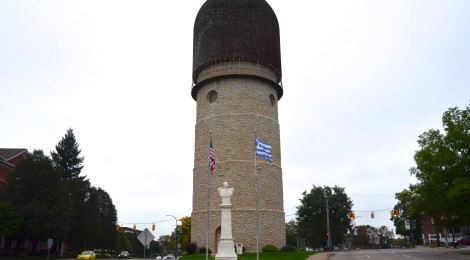 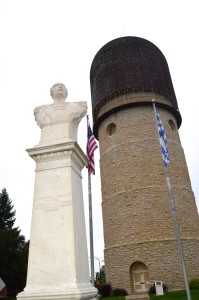 Many of our Michigan cities have at least one landmark that they are known for – in Ypsilanti it is the nearly-130-year-old Ypsilanti Water Tower. Home to 21,000 residents and Eastern Michigan University, Ypsilanti is named for a “hero of Greek independence,” Demetrio Ypsilantis. A statue of Ypsilantis sculpted by Christopher Nastos can be found between a Greek flag and an American flag in front of the water tower. The Ypsilanti Water Tower stands 147 feet tall and the outside is constructed of limestone. The two-sided Michigan historical marker next to the tower tells us a bit more about its construction and history: 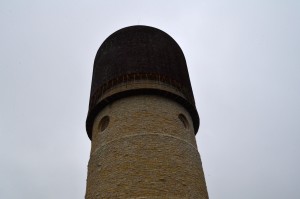 “Day laborers constructed this water tower which was completed in 1890 at a cost of $21,435.63. The tower and the city waterworks supplied 471 customers the first year. An ordinance passed on April 14, 1898, established a yearly rate schedule. Rates were based on the number of faucets in use, the type of business that customers operated and the livestock they owned. A residence with one tap was charged $5.00; a private bathtub cost an additional $2.00. Saloon keepers paid $7.00 for one faucet, $3.00 for each additional faucet and $1.00 for each billiard table. Each cow a person owned cost $1.00. People who failed to pay their bill were subject to a $50.00 and ninety days in the county jail. Until 1956 this structure was the only water tower in the Ypsilanti water system.” 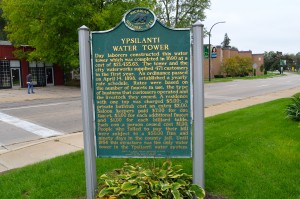 “The Ypsilanti Water Tower was designed by William R. Coats and constructed as part of an elaborate city waterworks project that began in 1899. Located on the highest point in Ypsilanti, the tower was completed in 1890. It is 147 feet high and has an 85-foot base constructed of Joliet limestone. The substructure walls taper from a thickness of forty inches at the bottom to 24 inches at the top. The reservoir holds a 250,000-gallon steel tank. To protect themselves from injury, the builders made three stone crosses; one is visible over the west door. The Ypsilanti Community Utilities Authority has operated and maintained the structure since 1974. In 1975 this tower was designated by the American Water Works Association as an American Water Landmark. It was restored in 1976.” 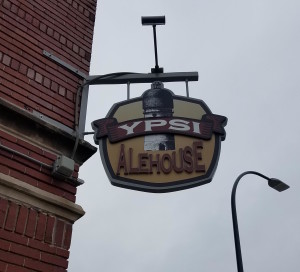 The Ypsilanti water tower has become a source of civic pride over the years, and it is featured in many logos throughout the city. It has been named one of the “most phallic buildings” in several different online contests over the years. The water tower has been designated a Civil Engineering Landmark by the Michigan chapter of the American Society of Civil Engineers. You can find the water tower at the intersection of N. Summit St., Cross St., and M-17 near the EMU campus (see map below).