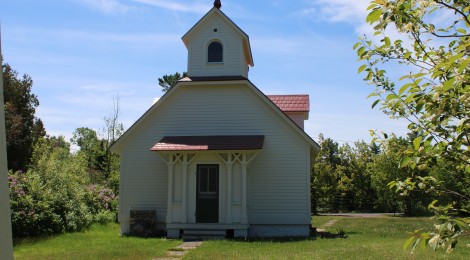 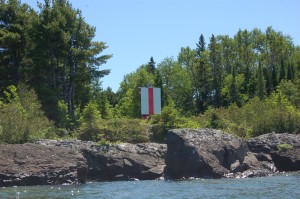 Copper Harbor is now known as a vacation paradise on the north shore of Lake Superior, but in the mid-19th century it was a busy shipping port. The Copper Harbor Lighthouse was constructed in the late 1840s to mark the entrance to the harbor but several shallow reefs still made it difficult for ships to safely enter the harbor. The Copper Harbor Range Lights were added in 1868 (replacing an earlier set), constructed in a similar style to the one used at other Great Lakes sites like Presque Isle (MI) and Baileys Harbor (WI).

One of the informational signs at the Copper Harbor Lighthouse shows an old picture of the range lights (from 1915) and details a bit more about their history and how they work. “By keeping the lights in line, one above the other, boats can safely enter the harbor channel.” 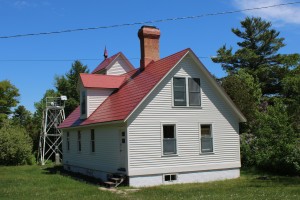 The front range light has a height of 21 feet, while the rear stands 34 feet tall. The front range was wooden until 1927, when it was replaced by the steel tower that can be seen today. The rear range was originally located on the upper level of a one and a half story dwelling, but was replaced by a steel skeletal tower in the 1960s (Seen to the left of the house in the photo above). The rear range house has been used as a dwelling for Fort Wilkins State Park staff, so if you visit please do so respectfully. 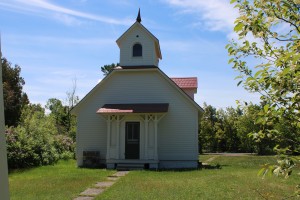 Both of these lights can be seen from the water, or you can park at Astor Shipwreck Park and walk across Fanny Hooe Creek to where you will see the range lights. For more information on the range lights, head over to www.lighthousefriends.com where you can even find some entries from lighthouse keeper logs detailing the efforts to keep these lights on during the winter months!