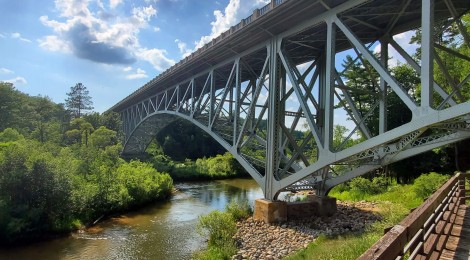 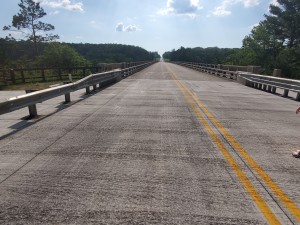 Michigan is home to many beautiful and architecturally significant bridges that carry its state and federal highways over rivers throughout the state. The Mortimer E. Cooley Bridge on M-55 in Manistee County is a significant Michigan bridge because it is one of only two cantilevered deck truss bridges in the state and the only one in the Lower Peninsula. Named for Mortimer E. Cooley, who used to be a professor at the University of Michigan and served on the State Highway Board (1933-43), the bridge carries M-55 over the Pine River. The Cooley Bridge Roadside Park provides a great spot for picnics, walking, and taking the stairs down to see the bridge and the Pine River up close. 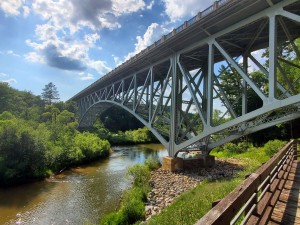 The bridge was constructed in 1934 by the Wisconsin Bridge and Iron Company. For the most part it is a twin of the Cut River Bridge on US-2 in the Upper Peninsula. The Cooley Bridge is 613 feet long with a main span length of 300 feet. According to HistoricBridges.com, “It is highly attractive with most beams on the bridge being built-up with v-lacing and/or lattice.” A plaque on the bridge notes that it was a Class III winner of the Most Beautiful Bridge from the American Institute of Steel Construction in 1935. 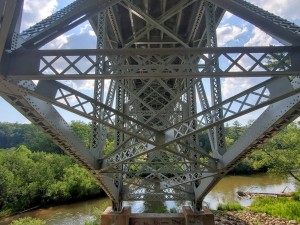 A short trail leads from the parking area at Cooley Roadside Park to a staircase that heads down to the Pine River for closer views of the bridge – you can even walk underneath it and get a good view of all the steel! The Pine River is a Northern Michigan favorite for canoeing and kayaking as well as for fishing (it is a Blue Ribbon trout stream). 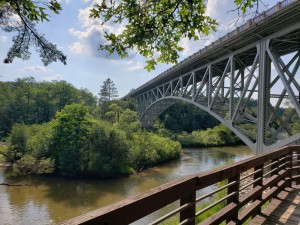 The Michigan Department of Transportation website has a great mini biography of the bridge’s namesake: “He was the leading exponent of a broader education for engineers beyond the technical requirements of the profession and of the involvement of engineers in public affairs. He helped establish at the university, both a short course for in-service training of highway engineers and officials, and a laboratory for the testing of road materials, one of the firsts in the country. As chairman of the State Highway Advisory Board (1933-1943), he was in the forefront of efforts to make Michigan’s highway system one of the nation’s best.”