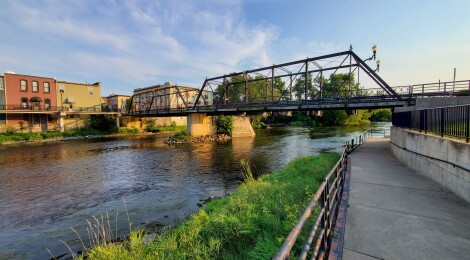 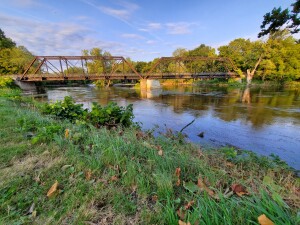 Most Michigan towns of decent size have a historic local bridge. Portland in Ionia County has four historic bridges, and you can drive across one and walk across the other three. We’ve made several visits to Portland over the past year visiting ConfluxCity Brewing, Leik Grove, the Portland River Walk, and more. Today we will take a look at the three bridges over the Grand River as well as one that crosses the Looking Glass River. Here’s some more information on Portland’s 4 Historic Bridges:

Bridge Street Bridge – Also known as Veterans Memorial Bridge, this 210 foot long Pratt through truss bridge carries Bridge Street over the Grand River. It dates back to 1890 and is currently open to vehicle (one-way) and pedestrian traffic. You can get great views of this bridge from William Toan Park. 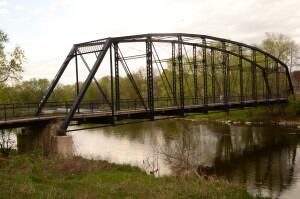 Kent Street Bridge – This 224 foot long bridge is one of only three of its kind in the state. Historicbridges.org has this to say: “With the Kent Street Bridge, its impressive size, pinned connections, the curved top chord, the v-laced members and bracing, and the extent of the bracing make this a bridge that is extremely beautiful. Geometric intricacy is what makes truss bridges so beautiful, and this bridge is certainly intricate.” The bridge is part of the Portland Riverwalk Trail and can be seen from Market St. near where it passes under I-96.

Portland Railroad Bridge – This 330 foot long former railroad bridge is now part of the Portland Riverwalk. It is a two span pin connected Pratt through truss bridge and it can be accessed by following the Portland Riverwalk from Two Rivers Park, or by parking in the small parking area down the road from the Red Mill on N. Water St.

Burroughs Street Bridge – The only one of these bridges to not cross the Grand River, the Burroughs Street Bridge is a 120 foot long rare two-pan pony truss bridge. Built in 1905, it was moved here from Kent County in 1995. It is one of only three surviving Michigan bridges that was built by the Groton Bridge Company of New York. You can walk to it by following the Portland Riverwalk southeast from Two Rivers Park. This was a fun one for us as one of our frequent kayak routes on the Flat River in Lowell takes us under the bridge that replaced this one.

The map below shows all four bridges.