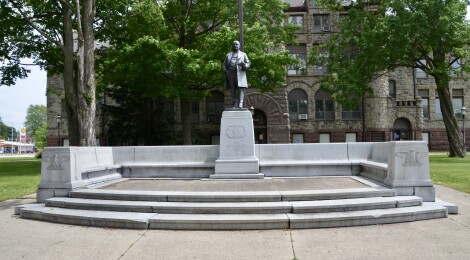 Muskegon is Home to the Oldest Statue of President William McKinley 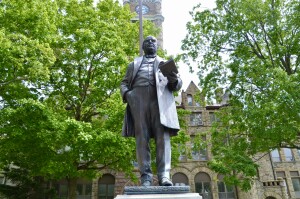 William McKinley was the 25th President of the United States, and was in the beginning of his second term when he was assassinated in 1901. A native of Ohio, McKinley was a member of Congress representing Ohio and served as governor before being elected president. While many monuments to McKinley exist around the country (especially in Ohio), the oldest statue of McKinley can be found in Muskegon, Michigan. After McKinley’s assassination, many cities sought to memorialize him with monuments and statues. Muskegon lumber baron and philanthropist Charles Hackley commissioned sculptor Charles Henry Nienhaus to complete this President William McKinley statue, which he had ready just eight months after the President had passed. 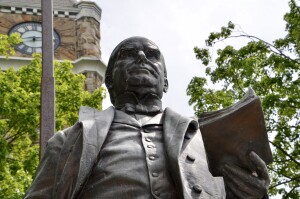 This statue is not only unique as the first of its kind, but notable for its realistic (or according to some sources “unflattering”) portrayal of McKinley. The President is depicted standing and giving a speech, with his hand in his pocket. He is shown as having a bit of a round belly and a bald head, something that is not a part of other tributes that popped up later. While some critique it as unflattering or ugly, others have praised it for being more realistic. The McKinley statue is located in front of the former Hackley Administration building, which was recently sold and is in the process of being redeveloped. 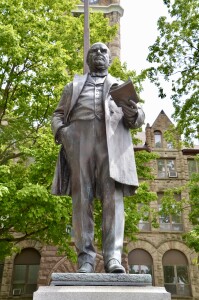 The sculptor of the McKinley statue was Charles Henry Niehaus, who had previously made statues of Abraham Lincoln and David Farragut in Hackley Park (located on the opposite side of Webster Ave.). He had a bust of McKinley started before the President was assassinated and reached out to Hackley about commissioning the full piece. In addition to Lincoln and Faragut, Hackley Park’s other two corners feature statues of Ulysses Grant and William Tecumseh Sherman, as the park pays tribute to those who fought in the Civil War. McKinley was the last President who had served in the Civil War, so it is fitting that his Muskegon memorial is located across from this park. 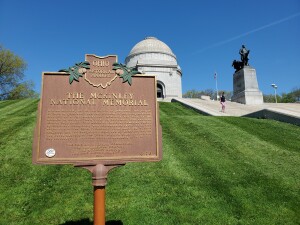 When we visited Canton, Ohio in April to see the Pro Football Hall of Fame, we also got the chance to visit the William McKinley Monument where the former President and family are entombed. His Presidential Library and Museum is located next to the museum, and the house he and his wife Ida Saxton McKinley lived in from 1878-1891 is part of the First Ladies National Historic Site.