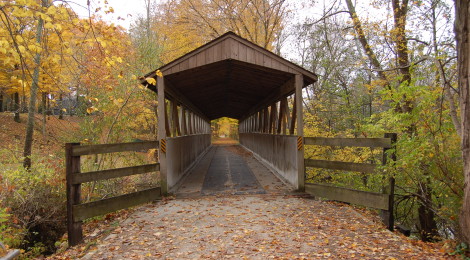 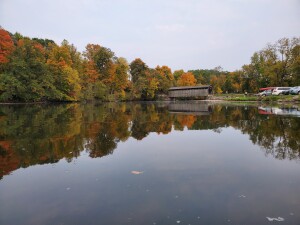 The fall color season is upon us in Michigan, with parts of the Upper Peninsula already at peak color and patches of orange, red, and yellow splashing into the Lower Peninsula landscape. This magical time is a favorite for photographers and sightseers, as our state becomes even more beautiful as temperatures drop and the seasons change. One of our favorite subjects for fall photography is covered bridges, which Michigan has more than a few of that are still standing. The color contrast of changing leaves, water, and old wood makes for great shots, and this post will show you where to find eight of these historic bridges so you can get out and catch the fall color change. This is Michigan Fall Color: Covered Bridges. 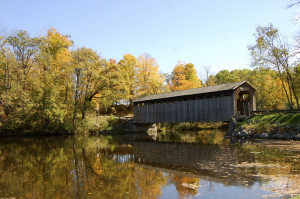 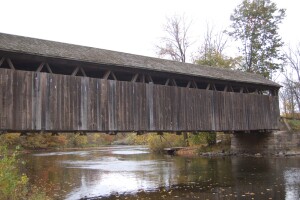 Ada Covered Bridge – Now open for pedestrian use only, the Ada Covered Bridge was reconstructed after a fire destroyed the original one in the late 1970s. It is 125 feet long and crosses the Thornapple River just below a dam, connecting the village of Ada with Leonard Park. 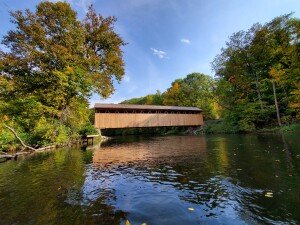 White’s Bridge – A fire in 2013 destroyed the previous White’s Bridge, but in 2020 a reconstructed version opened to pedestrian and vehicle traffic. The new bridge stayed as close as possible to the original specifications, 120 feet long as it crosses the Flat River near Smyrna. 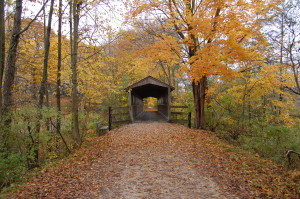 Donald F. Nichols Covered Bridge – Located on the Kal-Haven Trail east of South Haven, this 108 foot long bridge crosses the Black River and can easily be accessed by walkers and bicyclists. A railroad trestle bridge was converted into the pedestrian covered bridge that stands here today. 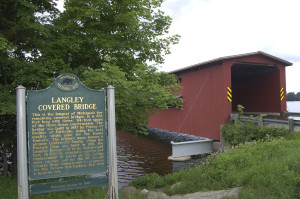 Langley Covered Bridge – Michigan’s longest covered bridge (282 feet) dates back to the 1880s, and restoration and repairs in the 1950s have helped it survive. You can find this bright red landmark in Saint Joseph County’s Nottawa Township.

Fisher Covered Bridge – The trails at Deerfield Nature Center are beautiful in any season but in the fall the color along the Chippewa River makes for excellent scenery. This bridge was built in the 1960s and is one of the top attractions at this excellent park near Mt. Pleasant. 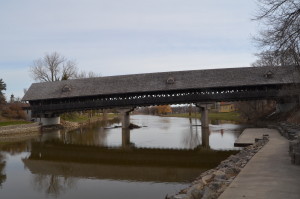 Holz Brucke – This 239 foot long wooden bridge was built in the late 1970s to connect the Frankenmuth Bavarian Inn Restaurant and the hotel and waterpark property on the other side of the Cass River. This unique bridge weights 230 tons and has covered pedestrian walkways on both sides. 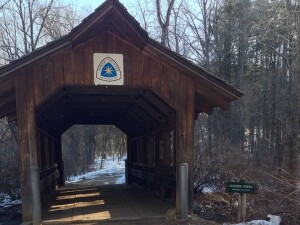 Augusta Creek Bridge – One of the state’s newest covered bridges, this 32 foot long bridge can be found near the entrance to the W.K. Kellogg Forest in Augusta. Open for pedestrian use, the bridge is also part of the North Country Trail. 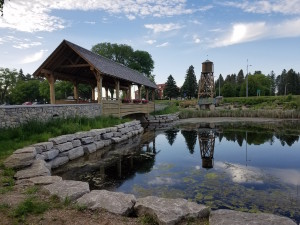 Alpena Duck Park/Island Park Covered Bridge – Two of Alpena’s beautiful city parks are connected by this new (2015) bridge that crosses the Thunder Bay River. You can see it driving by on U.S.-23, and a hike through the nature area here in the fall won’t disappoint! 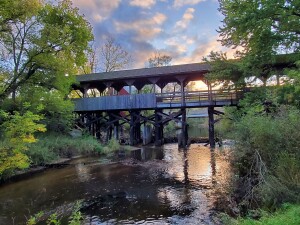 Reed City Covered Bridge – North of Reed City the Fred Meijer White Pine State Trail passes through a covered bridge not far from the intersection of U.S. 131 and U.S. 10. It is 151 feet long and follows a former railroad trestle over the Hersey River.