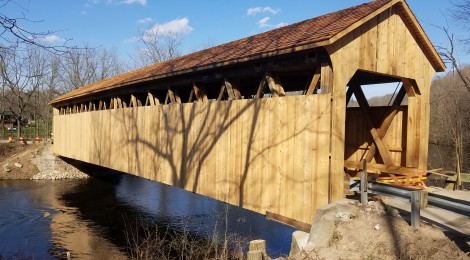 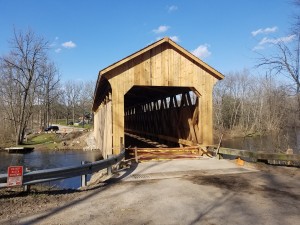 Very few wooden covered bridges remain in Michigan. The Ada Covered Bridge, Fallasburg Covered Bridge, Langley Covered Bridge, and Zehnder’s Holz Brucke Bridge are a few that remain, and thanks to years of fundraising efforts Ionia County’s White’s Bridge will once again join that list. The original White’s Bridge was erected in 1869, but a fire (arson) destroyed it in 2013. This year the bridge is scheduled to once again open to vehicle and pedestrian traffic after a successful fundraising campaign by the Whites Bridge Historical Society and a milder winter that allowed construction to progress ahead of schedule. 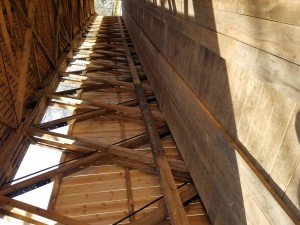 The Michigan historical marker for White’s Bridge provide some details of its history and construction: “This picturesque covered bridge, one of the last of its kind in Michigan, was built in 1867 by Jared N. Brazee and J. N. Walker, builders of several covered bridges in this area. The name of the bridge derives from the White family, a prominent pioneer family. The crossing of the Flat River here was known as White’s Crossing before the first primitive bridge was built. In 1840, a bridge of log corduroy construction was erected. It was replaced by this covered bridge, costing $1700. It is of the through-truss type with a gable roof. The hand-hewn trusses are sheeted over with rough pine boards. Wooden pegs and handcut square iron nails are used to secure the various parts of the bridge. White’s Bridge has been in constant use since 1867, proof that it was well made.”

On April 11 of this year the Board of Directors of the White’s Bridge Historical Society posted their most exciting update yet “The Whites Bridge is complete. Thanks to a very mild winter, Davis Construction’s workers were able to work almost everyday this winter. There is still approach paving work, some electrical and signing work that require the bridge to remain closed even to pedestrian traffic until this work is complete. Please be patient, we will let you know when you can drive and walk across. We would love to have a great ribbon cutting after the almost 7 year journey to reach this occasion, but we have to postpone the celebration until we all can gather as a group to celebrate.” Stay up to date with upcoming events by following https://www.facebook.com/RebuildWhitesBridge/. In addition to our visit by car, we also recently had a chance to kayak under the new bridge and stop at the new and improved launch/landing facility. 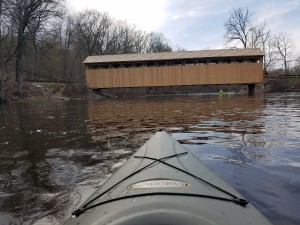