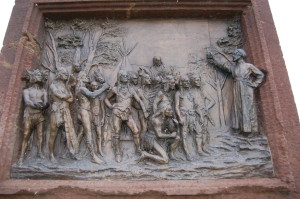 Jacques Marquette was a French Jesuit missionary who founded Sault Ste. Marie, Michigan and St. Ignace, Michigan while traveling as a missionary. He would later go on to explore the Mississippi River with Louis Joliet, providing maps as well as insight on the native people and their languages. He is honored in many places throughout Michigan, including the Jacques Marquette statue in Father Marquette Park on Front St. in Marquette. 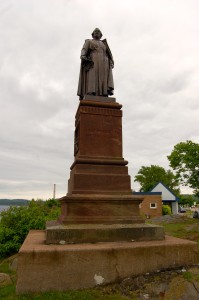 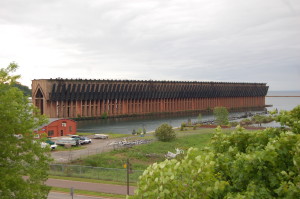 The Jacques Marquette statue sits on top of a hill with a great vantage point of the Marquette lower harbor. Here visitors will find the contrast between old and new as the old ore dock sits unused in the water, a few hundred feet from new hotels and condominiums. Engraved pictures around the base of the statue depict Marquette exploring in a canoe and interacting with native people, while other sides read “James Marquette, Intrepid Explorer” and “presented to the city of Marquette, July 1897.” 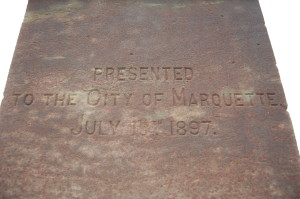 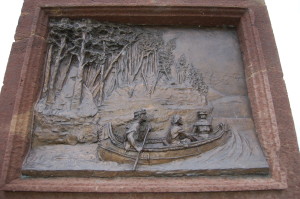 The Michigan historical marker next to the Jacques Marquette statue reads: “Serving as Priests, explorers, cartographers, linguists, farmers, scientists and chroniclers, Jesuit missionaries introduced Christianity to the Great Lakes region. Among them was Father Jacques Marquette, Born in Laon, France, he came to Quebec in September 1666. In 1671 he and Chippewa Indians who had been forced east by the Sioux established St. Ignace mission at the Straits of Mackinac. From there Marquette and Louis Jolliet set out on their voyage to the Mississippi River in the spring of 1673. Ill before the journey began, Marquette died on the return trip, on May 18, 1675. Indians from St. Ignace later brought Marquette’s remains to a chapel on the site where they were rediscovered in 1877 by Father Edward Jacker.”