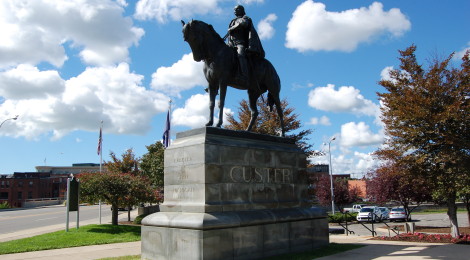 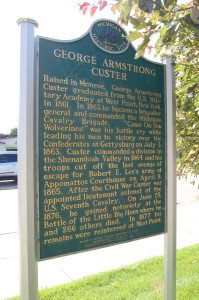 Monroe, Michigan is a city of 20,000 residents in the southeast corner of the state, home to many historic sites and monuments that include the River Raisin National Battlefield Park and the George Custer statue that sits at the corner of Elm Ave. and North Monroe St. Custer spent his childhood in the area before going on to serve in the Civil War and the Indian Wars in the West, which included his well-known defeat at the Battle of the Little Bighorn. The 14 foot tall statue in Monroe portrays Custer on top of his horse in his Civil War uniform, and is properly known as the George Armstrong Custer Equestrian Monument or Sighting the Enemy. It rests on a 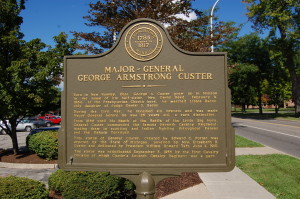 A historical plaque near the monument gives more history and background on Monroe’s life and connection to the area: “Major-General George Armstrong Custer. Born in New Rumley, Ohio, George A. Custer grew up in Monroe in the home of his half-sister, Mrs. David Reed. February 9, 1864, in the Presbyterian Church here, he married Libbie Bacon, only daughter of Judge Daniel S. Bacon [and his wife]. During the Civil War, he received six brevets and was made Major-General before he was 26 years old, a rare distinction. From 1866 until his death at the Battle of the Little Bighorn, General Custer commanded the famous Seventh Cavalry Regiment, leading them in scouting and Indian fighting throughout Kansas and the Dakota Territory. This statue of General Custer, created by Edward C. Potter, was erected by the State of Michigan, unveiled by Mrs. Elizabeth B. Custer and dedicated by President William Howard Taft, June 4, 1910. The statue was rededicated September 3, 1955, by the First Cavalry Division of which Custer’s Seventh Cavalry Regiment was a part.” 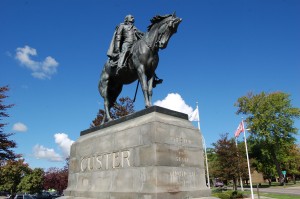 A Michigan historical marker on the opposite side of the statue reads: “Raised in Monroe, George Armstrong Custer graduated from the U.S. Military Academy at West Point, New York in 1861. In 1863 he became a brigadier general and commanded the Michigan Cavalry Brigade. “Come On You Wolverine’s!” was his battle cry while leading his men to victory over the Confederates at Gettysburg on July 3, 1863. Custer commanded a division in the Shenandoah Valley in 1864 and his troops cut off the last avenue of escape for Robert E. Lee’s army at Appomattox Courthouse on April 19, 1865. After the Civil War Custer was appointed lieutenant colonel of the U.S. Seventh Cavalry. On June 25, 1876, he gained notoriety at the Battle of the Little Big Horn where he and 266 others died. In 1877 his remains were reinterred at West Point.” 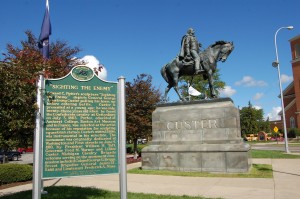 The other side of that marker goes into more detail about the statue Sighting the Enemy: “Edward C. Potter’s sculpture Sighting The Enemy depicts General George Armstrong Custer pulling his horse up before entering battle. Custer is presented at a young age; he was only twenty-three years old when he faced the Confederate cavalry at Gettysburg on July 3, 1863. Potter, educated at Amherst College, Boston Art Museum and in France, was selected because of his reputation for sculpting equestrian statues. Custer’s widow, Libbe, was instrumental in his selection. The monument was originally dedicated at Washington and First streets on June 4, 1910 by President William H. Taft, Governor Fred M. Warner and Libbe Custer. Michigan Cavalry Brigade veterans serving on the monument commission included Colonel George C. Briggs, Brevet Brigadier General James H. Kidd and Lieutenant Frederick A. Nims.” 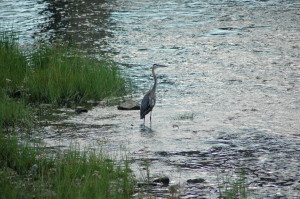 The statue is located next to St. Mary’s Park, which has a small playground, band shell, walking paths and frontage on the River Raisin. When we visited in June 2016 this was a popular spot for herons and other birds.