Michigan’s historical marker program is one of the most impressive in the country, with more than 1,800 sites featuring the well-recognized green plaques with gold text. You’ve likely seen at least one of these markers (perhaps without knowing it) as they depict sites with historical significance in each county of Michigan. These markers can be found at churches, schools, forts, bridges, town halls, and other sites while others honor former governors, labor and civil rights leaders, early settlers, and Native Americans. We’ve found many markers over the years that deal with Michigan’s involvement in the Civil War, many of them are located at cemeteries where those who served are buried. A handful of Michigan historical markers can be found outside of our state (one is even in France!), and most of them deal with Michigan Civil War history. Below we take a look at six notable sites in four states, a huge thank you goes out to Matt Roth for his photographs! 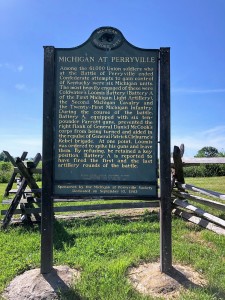 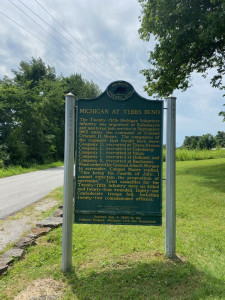 Michigan at Tebbs Bend (Campbellsville) – “During the first week of July 1863, while the people of the North and the South focused their attention on Gettysburg and Vicksburg, five Michigan companies defended the bridge across the Green River here at Tebbs Bend. They were members of the Twenty-fifth Michigan Volunteer Infantry, (Colonel Orlando H. Moore commanding), First Brigade, Second Division, Twenty-third Army Corps, Army of the Ohio. On the morning of July 4, 1863, Confederate cavalry troops under the command of General John H. Morgan attacked the 260 well-entrenched Michigan volunteers. After the Michigan troops repelled eight attacks, Morgan retreated from this locale. However, his troops continued to raid through Kentucky and Indiana before the last remnants were captured in Ohio. The Twenty-fifth Michigan Volunteer Infantry was organized at Kalamazoo and mustered into service in September 1862 under the command of Colonel Orlando H. Moore. The companies of the regiment that fought here were: Company D, recruited at Three Rivers; Company E, recruited at Galesburg; Company F, recruited at Niles; Company I, recruited at Holland; and Company K, recruited at Buchanan. When ordered by General John H. Morgan to surrender, Colonel Moore replied, “This being the Forth of July, I cannot entertain the proposition of surrender.” Total casualties for the Twenty-fifth Infantry were six killed and twenty-four wounded. Eighty-one Confederate troops fell, including twenty-two commissioned officers.” 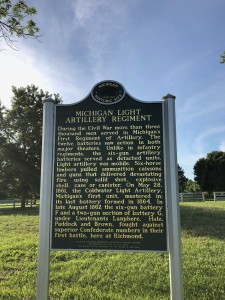 Michigan Light Artillery Regiment/Batteries F and G (Richmond) – “During the Civil War more than three thousand men served in Michigan’s twelve artillery batteries. The regiment saw action in both major theaters. Unlike infantry regiments, six-gun artillery batteries served as detached units. Light artillery was mobile. Six-horse limbers pulled an ammunition caisson and a gun that delivered devastating fire using solid shot, explosive shell, case or canister. Michigan’s first unit, the Coldwater Light Artillery Battery, mustered in on May 28, 1861; its last battery formed up in 1864. In late August 1862, and the six-gun battery F and a two-gun section of battery G, under Lieutenants Lanphere, Hale, Paddock and Brown fought against superior numbers in their first battle here at Richmond. Batteries F and G of Michigan’s First Light Artillery went into action here on August 29, 1862. They were the only Union artillery on the field of battle. Despite inadequate training and ammunition, they provided accurate fire that helped drive back the confederates “with admirable effect.” Early on August 30 the batteries defended the initial Union battle line. During successive Union withdrawals, the guns served as rallying points or as the rear guard. Seven of the eight were brought off the field in the last Federal withdrawal. In the final chaotic retreat, lacking infantry support and ammunition, the seven fell into enemy hands. Reported losses were 7 killed, 12 wounded and 65 captured. The two batteries later fought during the Vicksburg and Atlanta campaigns and at the battle of Nashville.”

Stonewall Regiment (Middleton) – “More than ninety thousand Michigan men served in the Union Army and Navy during the Civil War. The 17th Michigan Volunteer Infantry Regiment was mustered at the Detroit Barracks in August 1862 under the command of Colonel William H. Withington. The regiment consisted of raw recruits from field, workshop and schoolroom. One company was composed almost entirely of students from Ypsilanti Normal School, now Eastern Michigan University. With less than a month of military training, the 17th left for Washington DC, on August 27, 1862. From there it was sent to the Maryland campaign. On September 14, a little more than two weeks after leaving the state and just three days before the Battle of Antietam, the regiment engaged in battle here. The 17th Michigan Volunteer Infantry Regiment was among the units of General Ambrose E. Burnside’s 9th army corps that were engaged on battle here on September 14th 1862. The fighting began around 9:00 A.M. just south of this site. Around noon a Confederate battery opened fire on the regiment, which was supporting Cook’s Massachusetts Battery. The 17th held its position for several hours. At 4:00 P.M. the command was given for an assault along the entire Union line. The Confederates came out of the woods to meet the charge at a fence line in the middle of the field, then moved back to the stone walls along the crest of the hill. The 17th advanced and captured the stone walls. Of the 500 men of the “Stonewall Regiment” engaged in battle here, 27 were killed and 114 wounded, many mortally.” 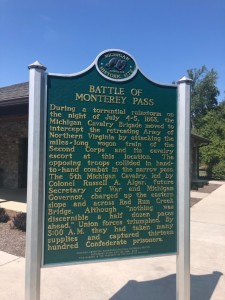 Battle of Monterey Pass/Michigan Cavalry Brigade (Waynesboro) – “During a torrential rainstorm on the night of July 4-5, 1863, the Michigan Cavalry Brigade moved to intercept the retreating Army of Northern Virginia by attacking the miles-long wagon train of the Second Corps and its cavalry escort at this location. The opposing troops collided in hand-to-hand combat in the narrow pass. The 5th Michigan Calvary, led by Colonel Russell A. Alger, future Secretary of War and Michigan Governor, charged up the eastern slope and across Red Run Creek Bridge. Although nothing was discernible a half dozen paces ahead, Union forces triumphed. By 3:00 A.M. they had taken many supplies and captured thirteen hundred Confederate prisoners. The Michigan Cavalry Brigade was formed in December 1862 of the 5th, 6th and 7th Michigan Cavalry regiments with General Joseph T. Copeland Commanding. In June 1863 the addition of the 1st Michigan Cavalry and Battery M, 2nd U.S. Artillery, completed the Brigade. On the eve of the Battle of Gettysburg, George A. Custer of Monroe assumed command with his promotion to brigadier general. On July 3, 1863, the brigade helped repulse General J.E.B. Stuarts Confederate cavalry. It fought in every major campaign of the Army of the Potomac until the surrender of General Lee at Appomattox Court House in April 1865. Nine brigade members received Medals of Honor for heroism during the Civil War.” 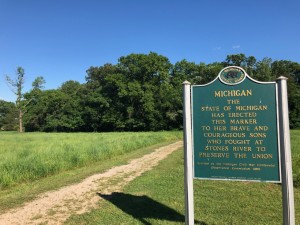 To see a list of more Michigan historical markers related to the Civil War, head over to http://michmarkers.com/ and click on the left tab for “military history,” then select the tab for “Civil War.”