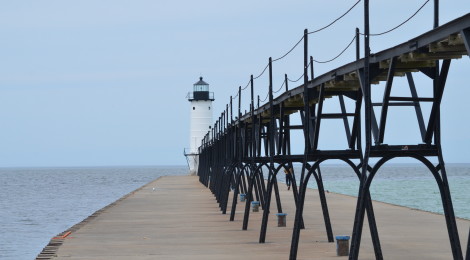 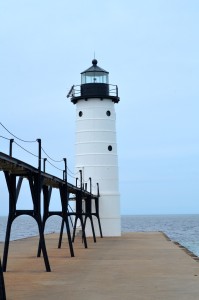 The Manistee River is the fourth longest in Michigan, flowing through the Northern Lower Peninsula for 190 miles before it reaches Lake Michigan. The Manistee North Pierhead Lighthouse is located where the river meets Lake Michigan, marking a shipping channel that still sees freighter traffic bringing deliveries of coal and other products. The area is also popular for recreational boating and fishing. The current Manistee North Pierhead Lighthouse was built in 1927 and is one of just four surviving Michigan pier lights to feature a catwalk (Grand Haven, South Haven, St. Joseph). 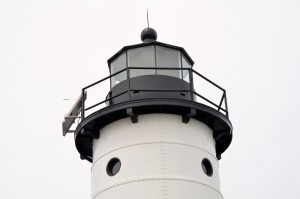 The current Manistee North Pierhead Lighthouse was built in 1927. The first lighthouse here was built in 1870 but was lost a year later when a fire destroyed most of Manistee. Several other structures stood here before the current 39 foot tall tower was constructed. This lighthouse is painted white and is a cylindrical design made of cast iron. The lantern room once housed a Fifth Order Fresnel lens but now has a modern incandescent electric bulb. The upper sections of the tower feature several porthole windows and the lanter room railing and top are painted black. 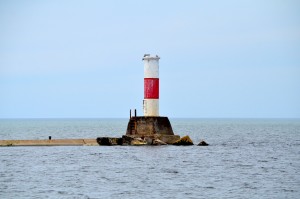 The Manistee South Pier Light is a 37 foot tall cylindrical steel tower on a concrete base. It is white with a red stripe painted in the middle. It was also constructed in 1927. 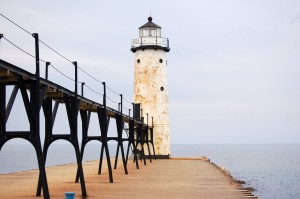 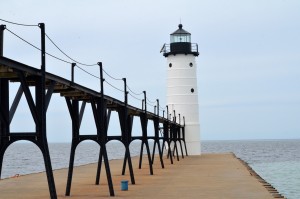 Here’s a look at the difference a fresh coat of paint makes! The top photo here is from a visit in April 2012 and the lower photo is a fresh one from April 2020. 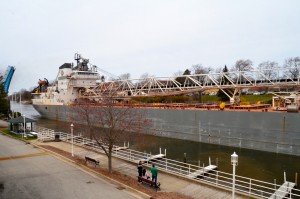 When we visited Manistee recently, we were fortunate to have good timing and get to see a freighter making its way through downtown. If you get the chance to see one of these large ships navigate the river it is something to behold. The “Manistee, MI Vessel Traffic” Facebook group provides frequent updates about arriving and departing ships. 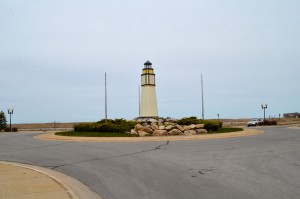 To get to the Manistee North Pierhead lighthouse: From US 31/Cleveland St. north of the river head west on Memorial Ave. which will become 5th Avenue. Follow 5th Avenue for several block, then head north on Monroe St. (at Red Szymarek Park). Follow Monroe to the roundabout shown above, turning off on Lakeshore Dr. There is parking available at 5th Avenue beach as well as by the Coast Guard Station.