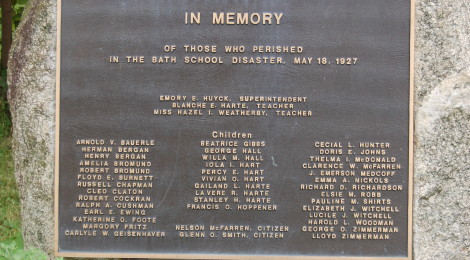 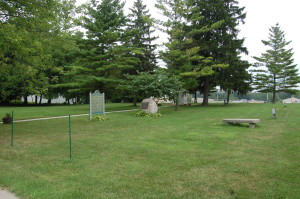 I was a sophomore in high school when the tragedy at Columbine high school unfolded, and still remember all of the news coverage like it was yesterday. Many years later I learned that a small town in Michigan was once the site of a similar tragedy that claimed the lives of more than 30 students and community members. This remains the deadliest school attack in U.S. history. With the 90th anniversary of the Bath School Disaster approaching this week, many news outlets have provided in-depth coverage of survivors’ stories as well as planned memorial events. You can read pieces from the Detroit Free Press and the Lansing State Journal that feature a schedule of memorial events, as well as interviews with survivors and their families – the LSJ interview with Irene (Babcock) Dunham, a senior at Bath who stayed home sick that day, is especially powerful. The Bath School Museum and Memorial is located at the current middle school (13675 Webster Rd.); the memorial statue Girl With a Cat by Carlton W. Angell is housed there. 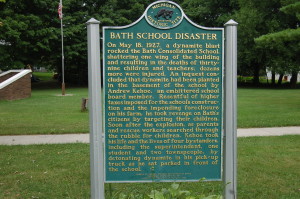 The two-sided Michigan historical marker at James Couzens Park give a synopsis of the day’s events and aftermath: “On May 18, 1927, a dynamite blast rocked the Bath Consolidated School, shattering one wing of the building and resulting in the death of thirty-nine children and teachers; dozens more were injured. An inquest concluded that dynamite had been planted in the basement of the school by Andrew Kehoe, an embittered school board member. Resentful of higher taxes imposed for the school construction and the impending foreclosure on his farm, he took revenge on Bath’s citizens by targeting their children. Soon after the explosion, as parents and rescue workers searched through the rubble for children, Kehoe took his life and the lives of four bystanders including the superintendent, one student and two townspeople, by detonating dynamite in his pick-up truck as he sat parked in front of the school.”

“The destruction of the Bath Consolidated School shared the front page of national newspapers with Charles Lindbergh’s transatlantic flight. “Maniac Blows Up School …Had Protested High Taxes” screamed the headlines of the May 19, 1927, New York Times. Michigan Governor Fred Green created the Bath Relief Fund, and people from across the country expressed their sympathies and offered financial support. Michigan U.S. Senator James Couzens gave generously to the fund and donated money to rebuild the school. On August 18, 1928, Bath looked to the future and dedicated the James Couzens Agricultural School to its “living youth.” A statue entitled, Girl with a Cat, sculpted by University of Michigan artist Carleton W. Angell and purchased with pennies donated by the children of Michigan was also dedicated that day.” 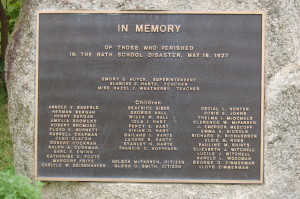