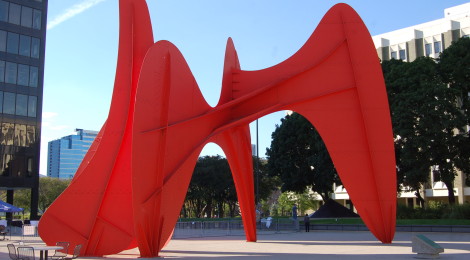 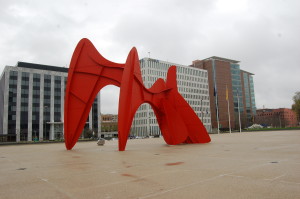 Few things in downtown Grand Rapids, Michigan are as iconic as the bright red sculpture La Grande Vitesse located on Calder Plaza. This significant work of art is now used on the logo for the city, and it was the first public art piece to receive funds form the National Endowment for the Arts as part of its Art in Public Places program. The sculpture was installed in 1969, and it measures 43 feet tall by 53 feet long and 30 feet wide while weighing 42 tons. The name La Grande Vitesse is French, translating to mean “great swiftness,” “high velocity,” or “great speed,” all nods to Grand Rapids and the river along which it is located. A plaque in front of the sculpture details the history of the pice and its arrival in Grand Rapids, and also tells more of Calder’s relationship with the city: “ 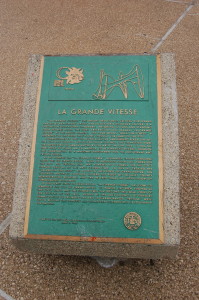 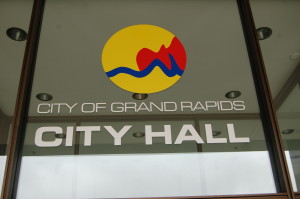 Alexander Calder grew to international fame for his mobiles and other works of art. Where a mobile features pieces moved by the wind or air currents, pieces like La Grande Vitesse are referred to as stabiles as they are solid pieces designed in a way to make viewers see motion in their form. There is a plaque in front of the sculpture that details a bit of its history: “As he worked on “La Grande Vitesse”, Alexander Calder developed close ties to Grand Rapids. Later he produced other art works for the city. His “Festival Sun” was adapted as a symbol for the city’s annual Festival of the Arts celebration. In 1974 he created the “Calder on the Roof,” as a gift to the people of Grand Rapids. The colorful abstract painting covers the roof of the Kent County administration building, and can be seen from the upper floors of surrounding buildings.” 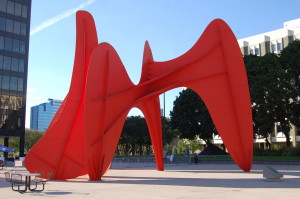 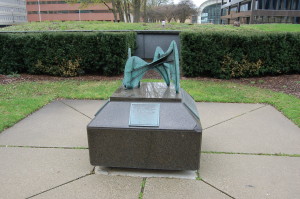 A miniature version of the stabile is located nearby (close to Ottawa Ave.), constructed on a 1/23rd scale and featuring a plaque in Braille so that blind visitors can also enjoy the sculpture. Mark di Suvero’s sculpture Motu, better known as the “tire swing,” can be found near the City Hall building just a few hundred feet away from La Grande Vitesse. 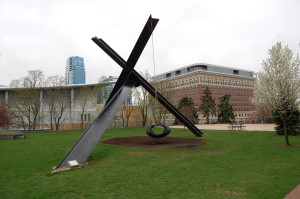 This is one of Grand Rapids’ numerous “selfie spots” – locations where visitors can take their picture in front of landmarks and post on social media. 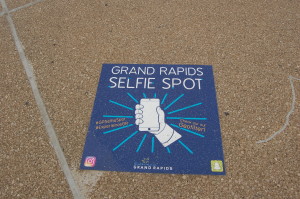