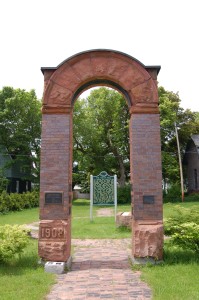 On our journeys across the state we’ve explored many historical sites, and while most provoke a sense of awe and nostalgia others are a reminder of tragedy and heartbreak. The site of the Italian Hall disaster in Calumet, Michigan is a reminder that the copper boom provided a great deal of wealth for the Keweenaw Peninsula and that mining had an enormous effect on every aspect of life in the region. A two-sided Michigan historical marker at the site stands near an archway from the building in a small pocket park on Elm St. Today, on the 103rd anniversary of this tragedy, we take a look at the memorial park and the history of this hall, as well as what events led up to that terrible tragedy. 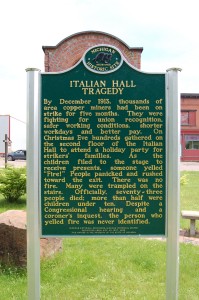 “By December 24, 1913, area copper miners had been on strike for five months. The miners were fighting for better pay, shortened work days, safer working conditions and union recognition. That day, during a yuletide party for the striking miners and their families, someone yelled, “Fire!” Although there was no fire, seventy-three person died while attempting to escape down a stairwell that had doors that opened inward. Over half of those who died were children between the ages of six and ten. The perpetrator of the tragedy was never identified. The strike ended in April 1914.” 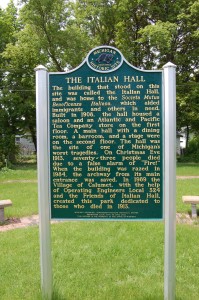 “The Italian Hall was built in 1908 as headquarters for Calumet’s benevolent society. The Society, organized along ethnic lines, encouraged and financially aided immigrants and provided relief to victims of hardship. Following the 1913 Christmas Eve tragedy, the hall continued to be used for nearly five decades. The two-story red brick building was razed in 1984. Through the efforts of the Friends of the Italian Hall and Local 324 of the AFL-CIO, the site of the building became a memorial park dedicated to the people who lost their lives in 1903.” 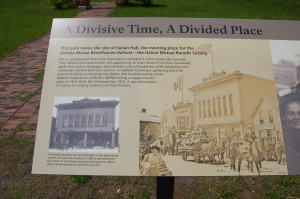 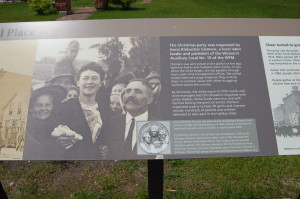 A set of three full-color plaques dives deeper into the history of the building as well as the buildup to the Christmas Eve tragedy. Here you can see pictures of what the hall used to look like, as well as pictures of a few of the people involved with the mining strike. “The Christmas party was organized by Anna Klobuchar Clemenc, a local labor leader and president of the Women’s Auxiliary Local No. 15 of the WFM.” The party was organized to help take minds off the strike, which was in its fifth month and still found management unwilling to negotiate with workers. The third panel of this plaque shows a small photo of folk singer Woody Guthrie, who wrote the song “1913 massacre” to honor those who lost their lives and call attention to the plight of workers. Some still believe the person who created the panic at the hall was an agent of union management. 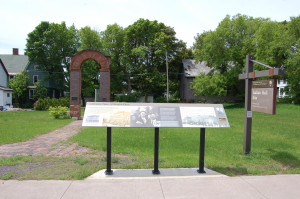