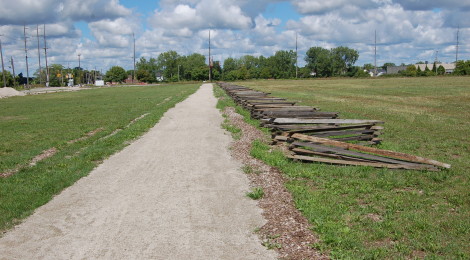 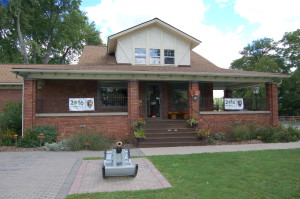 This was the site of the greatest loss for American forces during the war, as nearly 400 soldiers were killed during battle and more than 500 soldiers were captured. American forces were victorious in the first battle on January 18th, but were caught by surprise by a return attack days later. After the battle many more were killed in what was referred to as the “River Raisin” massacre, and the rallying cry of “Remember the Raisin” was used throughout the rest of the war. Today, the story of the battles that took place here in January of 1813 are retold through interpretive displays and exhibits. Events are held throughout the year, and the 204th Anniversary Commemoration of the Battles of the River Raisin will be held on January 21st, 2017. That commemoration features a tactical demonstration at the battleground near the ice arena, commemoration ceremonies at park headquarters, a presentation on Indian Treaty Rights at park headquarters, and a series of 1812 Programs at the Monroe County Historical Museum. You can find more information at https://www.nps.gov/rira/planyourvisit/things2do.htm. 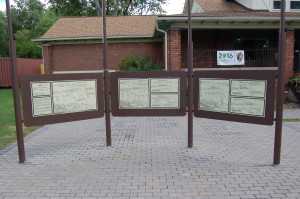 We stopped here during our summer 2016 trip around the Lower Peninsula, and learned a great deal about the battles that took place here. There is a short trail that leads past the battlefields, and a number of historical marker plaques provide information on those who fought here and those who lost their lives here. Informational plaques include: 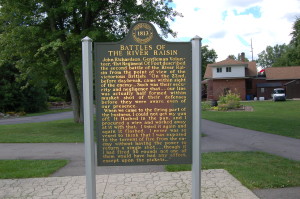 “Battles of the River Raisin” – One side here tells of the American victory from the perspective of Capt. John McCalla, while the other recounts the British victory as told by John Richardson.

“Artillery, January 22, 1813″ – Here we learn about the small cannons the British used in their attacks, as well as where and how they were effective.

“Roundhead” – Roundhead was one of two Native American leaders who fought alongside British forces.

“Skirmish Line” – This marker is near the believed skirmish line from the battles, and also notes that nine counties in Kentucky are named after men who fought (and eight who died) here at the River Raisin.

“U.S. 17th Infantry Campsite” – Near here is where American forces were camped on the night of January 22, when they were surprised by British, Canadian, and Native American forces.

“After the Battle” – Describes the efforts of area inhabitants to return to their homes after the war ended, making peace with Native Americans.

The park headquarters building has a number of indoor displays and relics from the War of 1812 era. Other park facilities include picnic areas, plenty of parking, and access to the River Raisin Heritage Trail that connects to Sterling State Park and downtown Monroe. Efforts are ongoing to improve this national battlefield park. For further reading on the subject, check out Invaded on All Sides by Ralph Naveaux, Massacre on the River Raisin: Three Accounts of the Disastrous Michigan Campaign During the War of 1812 by Atherton, Darnell and Cruikshank as well as the National Park Service’s page and http://www.riverraisinbattlefield.org/.