We love traveling around the great state of Michigan and seeing new things and old favorites. One of our favorites in 2015 was visiting Upper Hand Brewery in Escanaba, a newer brewery that is incredibly unique by only offering its bottled beer in the Upper Peninsula (and Wisconsin). We were privileged to get a tour of the entire operation and also try a couple beers in the taproom. That taproom is now open to the public three days a week and another way you can enjoy these great tasting craft beers north of the Mackinac Bridge. 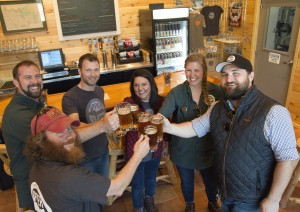 After being only available for private events and tours, the Upper Hand Brewery taproom has officially opened for business. The taproom has current hours only for three days. Current hours and days are:

We had the chance to interview Upper Hand Brewery production manager Sam Reese to find out more about the taproom and Backyard BBQ. Reese is a friend of our site as he gave us our tour of Upper Hand and also shared his five favorite places in Michigan with our readers.

Taproom Photo From Our 2015 Visit

Each brewing license is good now for two on-premise licenses. Reese told us, “Naturally, we wanted that second location to be at Upper hand. We’ve just been spending the meantime catching up.” The taproom seats 25 patrons inside and 32 outside on a patio. The space is not big compared to other breweries, but that shouldn’t be a surprise given it was never meant to be open to the public. “As you can imagine, when you build a brewery and you can’t legally operate a commercial taproom there, you don’t put a ton of time and attention into developing that space. So we have to go back and rethink how we move and function in what was built as a very small and unfinished area meant for only occasional use,” Reese told us.

While Upper Hand doesn’t offer food, it has partnered to get local food trucks in its parking lots many of the weekends it has been opened. Last week it hosted the Rollin’ Smoke Barbeque food truck. 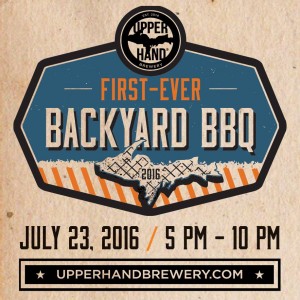 On July 23rd, Upper Hand will host its first ever Backyard BBQ (see Facebook Event Page). The event features Upper Hand beers, all you can eat BBQ (they’re roasting pigs), lawn games, and live music. Tickets are $25 in advance or $30 the day of the event. Tickets can be purchased online or at the taproom. Your ticket includes your first beer, a commemorative pint glass, all you can eat BBQ, and the included live music and games. Live music currently features Driver, Conga Se Menne, and Grassfire. Lawn games are horseshoes, cornhole, ladder ball, and human foosball.

When asked about the Backyard BBQ, Reese offered this, “Our first-ever Backyard BBQ is a huge community event and our first event of this size at the brewery. We are proud to be part of the Delta County community and economy, and we want to do our part to help establish Delta County as a great place to live, work, and play. So we’re throwing an over-the-top backyard BBQ, complete with great live music, a half-dozen or so roasted pigs, a bunch of lawn games, and, of course, plenty of cold beer.”

Upper Hand will also release at least one new beer (barrel-aged) at the Backyard BBQ. The brewery has been cranking out new beers including some specialty seasonal beers. We profiled 906 Ale, a specialty limited release beer dedicated to the Upper Peninsula and also featured Double Ringer, a Double IPA, in our Spring A to Z Michigan guide.

Reese hinted at using the Backyard BBQ and taproom as a test for new beers. “The taproom and the BBQ event present a great opportunity to release special, experimental, or limited offerings to our closest fans and get immediate constructive feedback,” Reese says. “We are nearly always working on something new,” he told us. 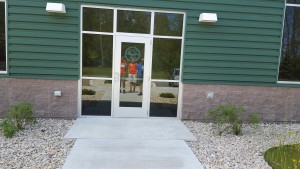 Upper Hand already wrapped its first expansion phase in March. This will now allow the brewery to produce 15,000 barrels of great tasting beer annually. The infrastructure is also in place to boost capacity to 20,000 barrels soon.

Reese is personally inviting everyone to the taproom to check it out. He told us, “I want to encourage people to stop by the brewery and grab a pint; I’ve spent the last two years having to turn thirsty people away and I couldn’t be happier that our doors are now open.”

If you haven’t had a chance to try Upper Hand Brewery beers yet, you should do yourself a favor and take the chance. The hard part is if you live in the Lower Peninsula, you will have to travel north to find some. This shouldn’t be a punishment though as the Upper Peninsula is an amazing place to visit. We try and stop and buy Upper Hand beer every chance we get in the UP or anytime we know someone going there. Several stores have had a hard time keeping up with stocking the beer due to its popularity. My personal favorite is UPA, a great tasting American Pale Ale. Reese points out that UPA is not dry hopped, making it an old school American Pale Ale.