Browse: Home   /   Breweries   /   Upper Hand Brewery: The Beer You’ll Come Back to the Upper Peninsula For 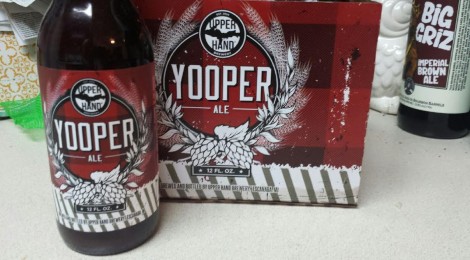 Upper Hand Brewery: The Beer You’ll Come Back to the Upper Peninsula For

On our recent vacation to the Upper Peninsula, we were able to tour one Michigan brewery. I feel a little privileged writing that we were fortunate enough to tour Upper Hand Brewery. If you haven’t heard of Upper Hand Brewery, chances are you’re a troll, aka a person living in the Lower Peninsula. If you’re a Yooper, aka person living in the Upper Peninsula, you should find a bar or store that carries their product, as I can say it is some of the best beer Michigan has to offer.

Upper Hand Brewery opened in October of 2014 and is already in expansion mode. The brewery is a passion project of Larry Bell, the man behind the Bell’s Brewery name that is well known in the state. Bell’s owns the brewery and is helping fund its early start in Escanaba, Michigan. It was recently announced that the brewery will be expanding and tripling capacity. The expansion will add 5400 square feet inside and an additional 2780 square feet of outdoor storage. In total, the planned July expansion will take capacity from 5000 barrels to 15,000 annually. 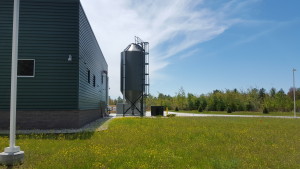 According to the Michigan Beer Guide Magazine (May/June #138), Upper Hand produced 625 barrels in 2014. Remember that came in a period just over two months. Compare that to parent company Bell’s, who produced 126,951 barrels. Getting production up to the 6000 range would put Upper Hand in the top 15 range for all Michigan breweries. The expansion to 15,000 barrels puts the company in the top 10 and closer on par with large state breweries like New Holland and Atwater. 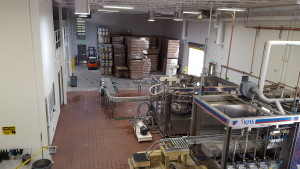 The expansion will help Upper Hand keep up with the already seen strong demand. It will also allow the company to expand into additional northern states (think Minnesota and Wisconsin) and possibly Canada. If you thought the expansion meant the beer was coming to the Lower Peninsula, you’ll be disappointed. We were told the beer will never be sold in the lower half of the state. Bell backed that belief in an interview to a local Marquette channel where he said, “This brewery is being built to celebrate the U.P. We’re not going to sell the beer in the Lower Peninsula, so those folks from down below that want to have this good beer are going to have to come up here to get it.”

Currently, Upper Hand Brewery offers five beers, with three of them available in bottles. The first three beers began with the opening of the brewery and have seen strong support. They are UPA, Lager, and Escanaba Black. The two newer beers Yooper, and UPX (a hoppier version of UPA) are available only on tap at bars in the Upper Peninsula. Some beers in the Upper Peninsula offer one Upper Hand beer, while others offer all five of them.

Here’s the ABV % for the five beers:

I have tried four of the five beers offered by Upper Hand Brewery, with Yooper being the only one left out. The UPA is the most popular of the three main beers, representing 50% of sales, according to production manager Sam Reese. Lager sales make up 30% and the Black Beer makes up the other 20%. Those figures do not calculate in the two newer draught only Yooper and UPX brands.

If you haven’t seen the Upper Hand beers yet, one of the coolest things is the labels. They definitely differ from the Bell’s style and that is thanks to Elegant Seagulls, a Marquette based company. In a case study on the Elegant Seagulls site it says, “It was important to maintain a “local” feel so we grabbed inspiration from vintage magazines, historic visuals, and the unique culture of the Upper Peninsula. The brand needed to not only look great on shelves but also appeal to craft brew enthusiasts. This beer is “brewed for the north” and we maintained that experience through the look of the packaging.” 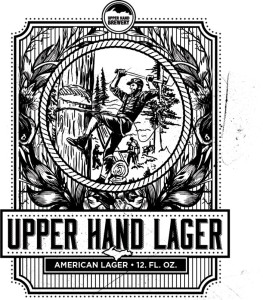 One thing Reese told us is Upper Hand will be participating in more beer festivals and events in the Upper Peninsula. A quick visit to the company’s website shows these two upcoming events in Marquette:

Also you’ll want to keep in mind that Upper Hand will be represented at the Bell’s 30th Anniversary Party in Kalamazoo on September 12th. That could be one of the few opportunities to ever try the company’s beer south of the Mackinac Bridge. The event will also feature numerous Michigan breweries and many out of towners as well. 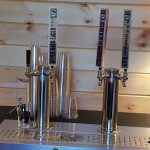 Along with the five beers on tap currently offered by Upper Hand, beer lovers can look forward to at least two more in the future. The company has an Old Ale and Baltic Porter aging in barrels right now inside the warehouse.

If you haven’t had a chance to try the beers from Upper Hand, you’ll want to make it a priority. This is great tasting beer coming from a legend in the industry (Larry Bell), and also a rich culture in the Upper Peninsula. Elmer’s in Escanaba and several Econo Foods (including Marquette) are great places where you can get Upper Hand bottles to take home. If you are a fan of the beer, show them some support on Facebook and Twitter, or consider buying one of their cool shirts.