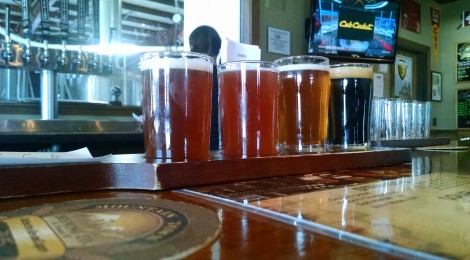 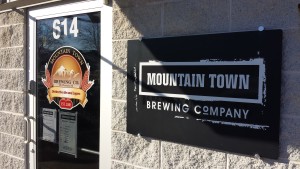 We made a trip up to Mt. Pleasant this week to do some hiking at Deerfield Nature Park, check out a few historic sites, and of course visit a brewery while in town. Mountain Town Brewing Co. has been providing the area with great beer since 1996, and while we had previously tried a few of their offerings in bottles we were excited to see what different options were available on draft at the brewery. 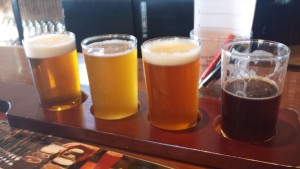 Our first flight gave us a chance to try out the Hobo’s Breath Brown Ale, Iron Horse IPA, Gambler’s Golden Ale and Sacred Gruit. The Hobo’s Breath was a pleasant brown, and something fans of Newcaslte will definitely enjoy. The IPA was well done, and the golden was a crisp, easy-drinking ale. We had the gruit on nitro, and it was incredibly creamy with hints of sweetness and tart flavor. Gruit is an ancient beer style in which herbs are used in place of hops, and we were intrigued and impressed by one of our first samples of this style. 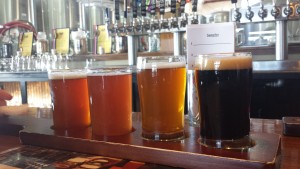 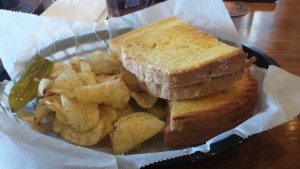 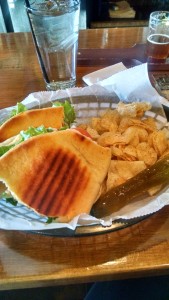 Our food arrived while we were working on this flight, with Allison choosing the Panini Italiano and me choosing the ham and swiss on pepper bread “Ham”mer panini. These were very generous portions of food and the perfect complement to beer sampling. Each came with chips and a pickle, and there were many other sandwich and soup options on the menu as well. 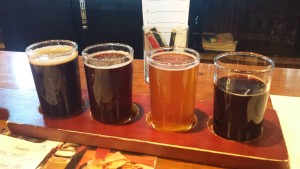 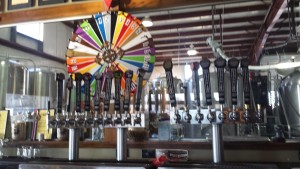 We enjoyed every beer we tried here while also finding the food to be great for the price. Our bar service was fantastic as well, despite there only being one person taking care of beer and food and up to 25 people in the tap room at times. We took home a growler of the Peach Gruit to share with friends, and we’ll definitely be stopping in here the next time we’re in the area. There is also a fine dining restaurant a few miles away, Mountain Town Station, which is located in a renovated train depot and featuring many of the same brew on tap.