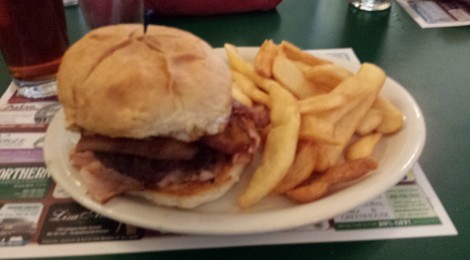 We arrived at this restaurant and brewpub in downtown Escanaba incredibly hungry from a long day on the road and plenty of hiking, and Hereford & Hops came through for us in a big way with incredibly filling food and a few good beers. There’s a lot going on here, with seating options in a formal dining room, lounge-style front dining room, bar, outdoor area with the opportunity to cook your own meat, and a hibachi grill. We chose the front dining area, and immediately ordered up a flight of beers.

We were able to get five different beers to try out. The flight tray had spots for up to three more beers, so it was a little disappointing that there weren’t more options to try out. The Whitetail Ale was light and easy-drinking, the Redemption IPA had a decent hop balance with flavor that seemed to kick in more at the end and the Sawtooth Stout was good but came across a bit on the watery side. The Highlander Ale was a solid example of a Scottish-style beer, but the standout here was the Cleary Red – it had great flavor yet was easy to drink and ended up being our choice of growler to take home.

A look at the menu gives a few more examples of beers that are served here over the course of the year; I’d love to come back and try a few more out if possible.

While the beer was pretty good, it was the food that left a lasting impression. We had spent most of our day hiking, and had traveled from Petoskey to Escanaba over the course of the day. I ordered up the Barnyard Burger, which ended up being a great choice. Bacon, ham and a fried egg on top of a 1/2 lb. burger and served with a side of fries, it was more than enough to fill me up.

Allison went with the Brew House Frisco Melt, a half pound burger topped with mushrooms, onions, Swiss and cheddar cheese and bacon.

We also had an appetizer of sweet potato fries which we found to be among the best we’ve had anywhere – crispy and with an amazing brown sugar glaze. Prices were in line with those of any major family restaurant chain, but with more local flavor. We were here early in the evening and it didn’t seem to be too busy, so we had the dining room to ourselves most of the time we were there.

I had read a very mixed bag of reviews on yelp and other sites before we planned our trip, so I went in hesitant but left pretty impressed. Looking at the menu, it seems one could stop here many times and not even come close to trying everything – there are steak, beef, pasta, pizza and more options we didn’t try and the hibachi grill is an intriguing addition. There are plenty of attractions that bring people to downtown Escanaba, and Hereford & Hops is a good choice for a few beer and a filling dinner while in town.