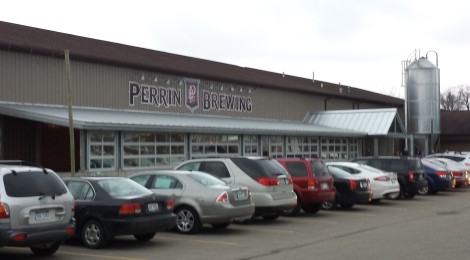 After months of talking about it, we finally made a trip to check out Perrin Brewing Co. on Dec. 18. This fairly new brewery is tucked away in a quiet area of Comstock Park, and we were pretty surprised to pull in to an almost full parking lot at 4:30 p.m. on a Thursday. A couple of holiday parties took up half of the main room, and the heated outdoor overflow area was pretty full too. We managed to find two seats at the bar, and settled in to try out some beers and food.

Perrin’s Black and Grapefruit IPA are readily available on tap throughout the year in Grand Rapids, and those two great beers were our only prior exposure to this two-year old brewing operation. There were 13 beers on tap, so we ordered up a flight to try all of them!

We started off with the Perrin Gold, which was an easy-drinking ale with a hint of sweetness. Next up was Das Braun Lager, which proved to be a solid German-style smoked lager. The third beer we tried was the Kona Brown Ale, which proved to be one of our favorites from the entire evening and our growler of choice to take home. Made with Ferris Coffee (a local GR favorite), the smooth flavor made this one of the best coffee beers we’ve had yet. The IPA and Black Manifesto (a black IPA) were also solid and would be great choices for a take-home growler.

The next three beers are considered part of Tier 4 – IIPA (a double IPA), Kingdom of Tonga Vanilla Porter. These two beers presented great flavor and didn’t come across as overpowering in any way. The porter stood out as another one of our favorites. After these three we moved on to the Cooper’s series – a selection of four beers that were aged in oak barrels. With an average ABV of 9% these were heavy hitters but were all well-balanced and flavorful. We particularly like the Hopwood and Stoutwood, while the Redwood and Quadwood are also worth trying. The final two beers were from the specialty tier and proved to be among the more unique tastings of the night. The Razzberry Blonde was a great, sweet fruit beer that was incredibly easy to drink and You Bretta Run was a well-crafted sour that surprised us.

On to the food – we were incredibly impressed with how fast our appetizer and entrees came out considering how busy things were. We ordered the fried pickles as an appetizer, and they were out within five minutes. As the picture above shows, these aren’t pickle chips or spears, they’re thick sandwich-strip pickles perfectly deep-fried and served with ranch.

If that wasn’t enough to get our mouths watering, we ordered dinner and it was up in about 10 minutes. Allison went with the Buffalo Mac and Cheese (above) while I tried out the Grilled Cheese Panini (below) – a blend of Swiss, American and Provolone cheeses on sourdough bread. It was quite delicious and comes served with a side of fresh chips.

Perrin may be a relatively new player in the Grand Rapids beer scene (they’ve been open since 2012), but with a strong lineup of beers they’ve built a loyal customer base and an impressive following. While they don’t currently bottle or can any of their beers (with the exception of two recent Killing Craft offerings), when they do decide to move in that direction they will no doubt have a great deal of success.