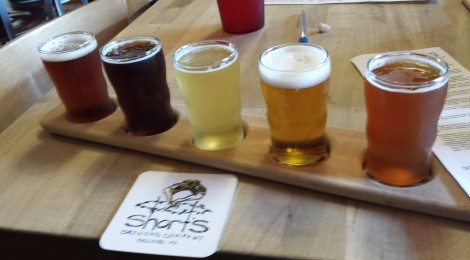 We visited Short’s Brewing Company in Bellaire shortly after they celebrated their 11th anniversary, and we found their pub to be incredibly inviting, full of great and unique craft beers and ciders as well as tasty food. Short’s remains unique among the big brewers in Michigan in the fact that it does not distribute outside of the state. Despite that limiting their reach, in 2014 they passed New Holland Brewing to become the third largest producer in the state (trailing Bell’s Brewery and Founders Brewing). Another recent accolade came in 2012 when Short’s was named the 3rd best brewpub in the country by The Street, a digital finance media company. Earlier in 2015, they won The Detroit News‘ Beer Madness bracket as readers’ favorite Michigan brewery. 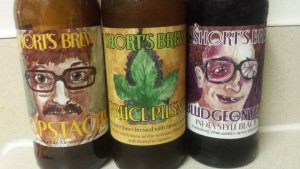 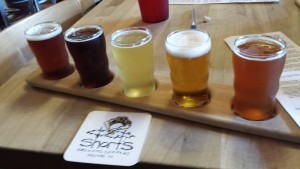 When we visited, there were 20 different beers on tap. We skipped over the ones that we had already tried in bottle from local retail outlets, and ordered up a couple of flights with some new-to-us brews. We tried out the Autumn Ale (an ESB), The Village Reserve, Pontius Road Pilsner and Proverbial Mind Spread (dry hopped amber ale). The most impressive beer in this flight, however, was Happy Tendencies – a Scottish Ale aged in bourbon barrels that was smooth and easy to drink with a surprisingly low 5.5% ABV.

We took a break from flights to try out some food, picking from a great selection of appetizers, salads, sandwiches, pizza and more. Our bartender at Mackinaw Trail Brewing Company earlier in the day had mentioned that the mac & cheese changes daily but was possibly one of the best choices on the menu. I decided to go with the Pizza Mac, which ended up being a great decision. Allison had the White Pepper sandwich – turkey, avocado, roasted red bell peppers, red onion and provolone with a roasted garlic chipotle aioli on ciabatta bread, and really enjoyed it. 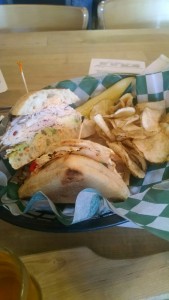 A third and final flight of beer gave us a chance to sample Pandemonium Pale Ale, Old Reliable (American pilsner), Local’s Light, Earl of Brixom (English Dark Mild Ale) and Starcut Ciders Five to One. This was our favorite of the two ciders we tried, as it exploded with flavor from its use of Michigan apples, blueberries, strawberries, raspberries and blackberries. 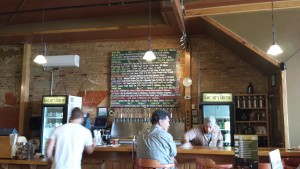 As we highlighted back in July with our 14 Northwest Michigan Breweries You Should Check Out post, there are plenty of great options in the Petoskey and Traverse City areas. Short’s in Bellaire might be a little out of the way, but it is worth the trip! This would also be a great add-on to any trip to Boyne or Torch Lake, and it’s almost a guarantee that a beer (or 10) you’ve never tried will be on tap each and every time you visit.