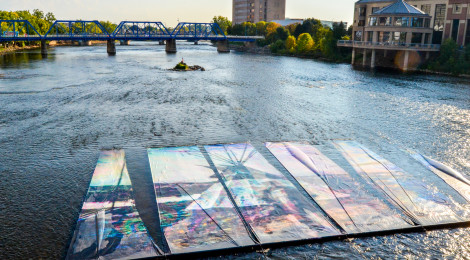 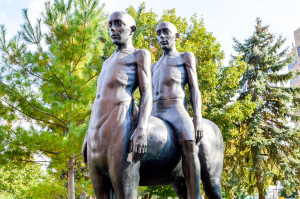 ArtPrize 9 is now in its second week in downtown Grand Rapids. The jurors’ shortlist of 25 finalists (five finalists in five categories) has been announced, and the artprize.org website now has a “leaderboard” showing the top 25 public vote-getters in each of the four art categories (two-dimensional, three-dimensional, installation and time-based). We hope you enjoyed our first Photo Gallery Friday: ArtPrize 9 as well as our interview with ArtPrize artist Michael Ingle; we have put together another collection of some of our favorite photos from this one-of-a-kind art festival. 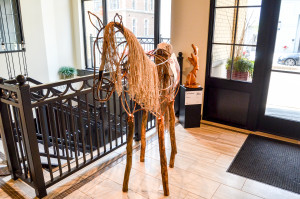 “Horses Being Horses: Western Wild Herd” by Adrienne Vittorio, at the Acton Building

Entires range from traditional sculpture to paintings to installations, with popular themes once again including animals, water, politics and more. This time around we stopped by the Women’s City Club, Grand Rapids Art Museum, Grand Rapids Public Museum, Grand Rapids Downtown Market, and other locations. It was great to once again see many artists out and in front of their pieces, interacting with ArtPrize 9 visitors. A few of the specific pieces we enjoyed were “Oil + Water” in the Grand River, which takes a photo that artist Ryan Spencer Reed took at last year’s Dakota Access Pipeline protests and places in in the water to create the illusion of an oil spill, and “Furniture City” by Mike & Elyssa, a large wooden chair (in front of the “tire swing” on the Calder Plaza) that features the Grand Rapids skyline and pays tribute to its rich history in the furniture industry.

“The Language is Asleep” by Chris Vitiello, at Grand Rapids Art Museum

First round voting ends on September 30th, at which time the finalists in each category will be announced. Second round voting begins October 1st and will decide the public vote winners in each of the four categories (announced October 8th). Find out more details and cast your votes at http://www.artprize.org/.