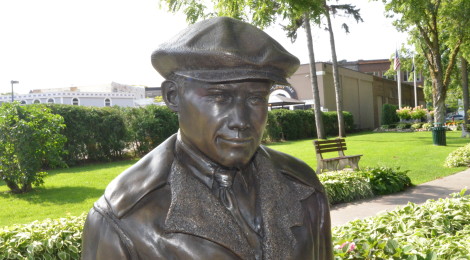 September 30, 2017 · by jonkatje · in Arts and Entertainment, Roadside Attractions

Nobel Prize-winning author Ernest Hemingway spent a great deal of time in Northern Michigan during the early 1900s. Petoskey is incredibly proud of their Hemingway heritage (as we’ve previously noted with our Walking Tour of Hemingway Sites in Petoskey post), and in July of 2017 an Ernest Hemingway statue was unveiled in Pennsylvania Park. 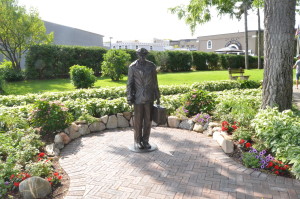 A plaque next to the statue reads: “Ernest Miller Heingway, 1899-1961, Nobel Laureate – Literature – 1954. Northern Michigan and a small cottage on Walloon Lake named ‘Windemere’ became the summer home for the Hemingway family of Oak Park, Illinois, from the time of young Ernest’s infancy in 1899 to the time of his marriage in nearby Horton Bay in September, 1921. This statue is based on a January, 1920 photograph near this spot that shows him ready to depart Petoskey for a job in Toronto. At the time, young Ernie had just spent several months in Petoskey recuperating from World War I wounds and diligently working to become ‘a writer.’ Ernest Hemingway’s first published fiction included a group of short stories written in Paris that featured the adventures of ‘Nick Adams’ in locations around Northern Michigan. These stories, demonstrating his love of the outdoors in this region, brought his revolutionary style of writing to the attention of New York City publishers in the early 1920s. A pair of novels followed, and within a few years of leaving Northern Michigan had become a famous author known to readers around the world. Ultimately, Hemingway’s fiction led to the Pulitzer and Nobel prizes in literature and an enduring status as one of this country’s greatest writers.” The plaque also notes that the sculptor was Andy Sacksteder and the donor behind the statue was Robert Jensen Dau. 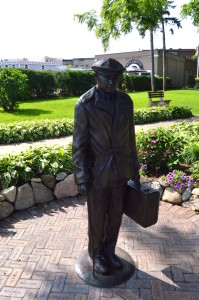 Sacksteder has been a regular fixture at ArtPrize in Grand Rapids the past few years. You can check out his latest work, “Lightkeepers,” in our ArtPrize 9 Photo Gallery Part One. In 2015 he won the top prize for installation public vote with “REACH and SPLASH,” and in 2013 he took home third place for his sculpture “UPLifting.”