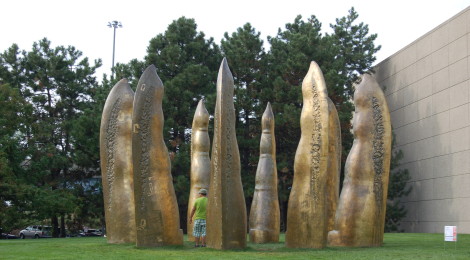 Photo Gallery Friday: A Look Back At ArtPrize 2010

Last week we took a look back at the 2009 edition of ArtPrize, the first year the celebrated art competition took place. With this year’s event set to kick off in less than two weeks, downtown Grand Rapids is preparing for hundreds of thousands of visitors. The 2010 winner of ArtPrize was “Cavalry, American Officers, 1921″ a large pencil drawing by Chris LaPorte. Popular venues included the GRAM (Grand Rapids Art Museum), The B.OB., DeVos Place Convention Center and the Gerald R. Ford Museum. The second year of ArtPrize saw more than 1,700 entries, which remains a record for the event. The 192 unique venues and 465,538 total votes cast are also still records for ArtPrize. This year’s event runs from Sept. 23-Oct. 11 and more information can be found at http://www.artprize.org/.