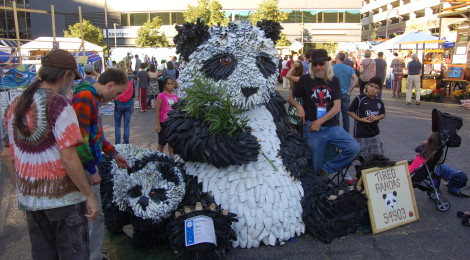 Photo Gallery Friday: A Look Back At ArtPrize 2013

The seventh year of ArtPrize got underway on Wednesday, and we continue our series of reflections back on previous years with this look at the 2013 competition. That year, a landscape art quilt “Sleeping Bears Dunes Lakeshore” by Ann Loveless took home the top prize. As with previous editions, entries featured at the Gerald R. Ford Presidential Museum, the Grand Rapids Art Museum, the B.O.B., the Grand Rapids Public Museum, and the Grand River area were visited often and proved very popular with voters.

Other popular pieces from the Artprize 2013 Top 10 that are featured in this gallery include “Polar Expressed” by Anni Crouter (2nd), “Tired Pandas” by Nick Jakubiak (10th), “Earth Giant” by Benjamin Gazsi (6th) and “Myth-or-Logic” by Robin Protz (7th). This year’s event runs through Oct. 11 and more information can be found at http://www.artprize.org/.

To stay up to date on all things ArtPrize related, head over to https://www.artprize.org/. The site’s history of the event includes: “The brainchild of native Grand Rapidian and entrepreneur Rick DeVos, the first ArtPrize took place in 2009. Rick’s idea was simple but striking: to create an art competition open to anyone willing to submit work and to award the world’s largest art prize, of $250,000 that year, to a participating artist based solely on votes from the public present at the event. A signature of that first ArtPrize, and every ArtPrize since then, is voting on the Web or the ArtPrize app. Visitors to Grand Rapids who experience the art get to register their opinions through two rounds of voting.” It also details how things have evolved over the years: “In 2010, ArtPrize introduced an international jury composed of artists, critics, curators and museum directors who awarded a series of juried awards. Each year since 2010, recognized art world experts have come to Grand Rapids to participate in the judging of art and awarding of prizes.”