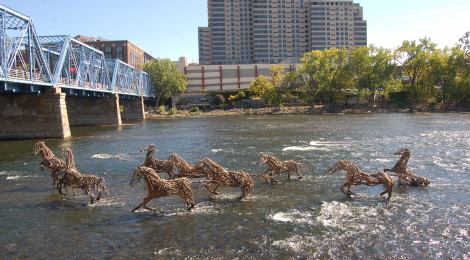 Photo Gallery Friday: A Look Back At ArtPrize 2012

In the past two weeks, we’ve shared some of our favorite photos from the first two editions of ArtPrize, held in 2009 and 2010. With the 2015 edition only days away from starting, our series of reflections on previous years continues with this gallery from 2012 (if you’re paying close attention you’ve noticed we skipped 2011 because photos from that year have mysteriously disappeared). ArtPrize is “an open, independently organized international art competition which takes place for 19 days every other fall in Grand Rapids, Michigan.  $250,000 in prizes are awarded by smartphone-enabled public vote, including a $200,000 grand prize. Any artist working in any medium from anywhere in the world can participate. Art is exhibited throughout downtown Grand Rapids—museums, bars, public parks, restaurants, theaters, hotels, bridges, laundromats, auto body shops, vacant storefronts and office spaces. Artists and venues register for the competition then find each other through an online connections process in late spring.”

The 2012 contest was won by Adonna Khare for her pencil drawing “Elephants,” which was housed at the GRAM. That site was one of the most popular, and it was joined by Ah-Nab-Awen Park, the Grand Rapids Public Museum, the B.O.B., and DeVos Place Convention Center as top venues. ArtPrize Seven kicks off on Sept. 23 and runs through Oct. 11. You can find more information at http://www.artprize.org/.