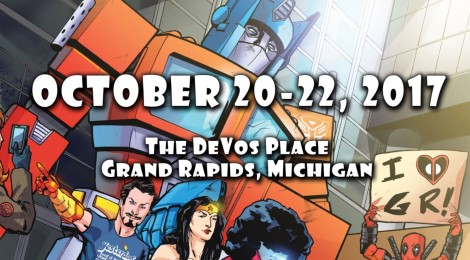 The 2017 Grand Rapids Comic Con is less than a week away. We are excited to once again attend this event and also thrilled to bring an interview with event co-founder Mark Hodges to our readers. If you’re a fan of comic books, superheroes, Star Wars, Star Trek, Godzilla, and other TV/movies, you won’t want to miss this great annual event held at the Devos Convention Center.

I am excited to bring you our preview of the Grand Rapids Comic Con, a great family-friendly event that takes place annually. The event gets bigger every year and continues to bring in huge media guests and artists that span a wide range of fandoms and pop culture. My kids (ages 3 and 5) are excited to attend this event and even have a countdown calendar on our fridge at home. This will be the second and first time attending the event for my kids and I am looking forward to seeing several new items this year.

Here are the details on the dates and ticket prices for the upcoming Grand Rapids Comic Con: 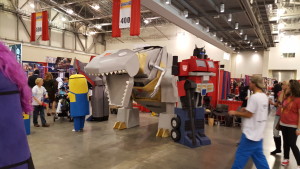 Among the highlighted media guests are:

The Grand Rapids Comic Con started in 2013 as a small gathering at the Home School Building in Wyoming. That year, thousands of people were turned away due to overcapacity problems. It was also that year that proved Grand Rapids had a huge base of people that would attend a large comic themed convention once a year. Since that time, the convention has grown to the much larger Devos Convention Center and attracts around 30,000 people to the event. 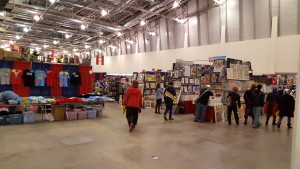 Grand Rapids Comic Con co-founder Mark Hodges was kind enough to answer questions we had about the history of the event and what’s in store for the future. When asked about the early beginnings of the event, Hodges traces it back to 2006 in Pittsburgh. “I was a vendor at a show in Pittsburgh in 2006, and to be honest the show was not very good. I was bored out of my mind, so I started thinking why isn’t anybody doing this kind of thing in Grand Rapids,” Hodges said.

Hodges spent the next couple days coming up with his grand idea, which included a “huge show, Hollywood celebrities, nationally known comic guests, after parties” and so on. Hodges then came to the conclusion that “it was the stupidest idea I ever had and tossed it out”. The idea never left and Hodges has created a big event for the city of Grand Rapids that is going strong. 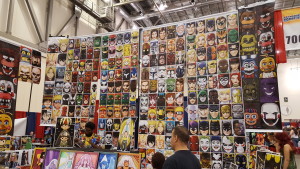 One of the things that makes the Grand Rapids Comic Con great is how it continues to grow each year and also features items appealing to every fandom. Perhaps this comes from seeing how other conventions do it around the country. Hodges attends around 35 shows every year, most within a 300 mile radius of Grand Rapids. As with other past years, the 2017 Grand Rapids Comic Con features some after-hours activities. Hodges tells us, “There are a lot of after-hours activities: punk rock concert, dance, karaoke, panels, and a ton more. The gaming room is open on Friday and Saturday night until 1am.”

Hodges tells us he does his best to “book what people want”. That certainly seems to be the case as the convention continues to attract top talent from several of the hottest all-time movie and television properties (Star Trek, Star Wars, Game of Thrones). Check out the Grand Rapids Comic Con’s fandom guide on its site where you can see guests and panels related to particular series.

The Grand Rapids Comic Con hosts several panels that will answer questions for fans, provide better insight into the craft of writing or acting, and tools to build set pieces and cosplay. Hodges highlighted one particular panel to us and we have to share. Sonoe Nakajima, daughter of Godzilla actor Haruo Nakajima, will do a retrospective panel on her father on Friday night. 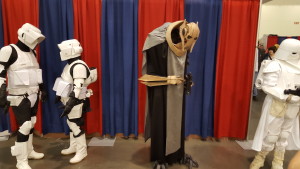 Another huge part of comic cons is the cosplay and dressing up as characters from comics, television and movies. Along with this comes organized costume groups that also raise money for charities. One of my family’s favorites is the Great Lakes Garrison, which is a local Star Wars group that can be seen throughout the state at various sporting events and non-profit fundraisers. Also be sure to check out the Michigan chapter of the Mandalorian Mercs, a group of Star Wars cosplayers resembling famous villain Boba Fett. The Grand Rapids Comic Con will feature several of these organized costume groups. Hodges tells us, “I have the groups involved because I want them recognized. Most of them are charity-based groups and do a lot of positive things in the community, helping charities raise money and so on. They use our event to recruit like-minded people and show the community what they do.”

My kids are looking forward to meeting superheroes that will be a part of the Cosplay Crusaders group from West Michigan. This group has been popping up everywhere and is quickly recruiting new members to join its force. The Grand Rapids Comic Con will also feature one of the newest to Michigan cosplay groups with The Finest, a GI Joe dedicated cosplay group. 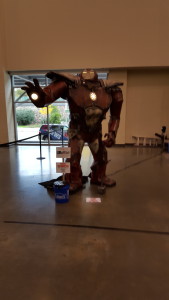 If you’ve attended the Grand Rapids Comic Con in the past, or other Michigan conventions for that matter, the name Rob Miller will be familiar. A Michigan native, Miller was a contestant on the SyFy Channel competition “Face Off”. Miller has been active with Grand Rapids Comic Con since 2015. “He built a Hulkbuster based off the film Avengers 2: Age of Ultron and displayed that in 2015 and a variation of the “Game of Thrones chair using swords from various nerd-based shows in 2016,” Hodges recalls. This year, Miller brings to the Grand Rapids Comic Con a life sizer replica of Groot and Rocker Raccoon from “Guardians of the Galaxy”. Hodges says, “Groot and Rocket Raccoon is his newest creation and I have seen it, pretty neat-o.” 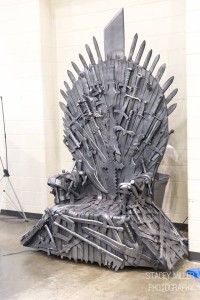 Along with the huge Groot and Rocket Raccoon, there will be some pretty cool movie props and vehicles at the Grand Rapids Comic Con. The event will feature a Batmobile (1966 replica), a Bat Trike (from Michigan’s own Batman, The Dark Knight of MI), the Jurassic Park Jeep, the Echo-1 from Ghostbusters, a Ghost Rider Hell Cycle, and the actual 1965 Shelby Cobra used in Iron Man, featuring the dent and all. Guests can get their pictures taken with most of these vehicles for small donations to charities. The price is normally around $5 and the pictures are uploaded to Facebook albums days after the convention is done. Also check out the Great Lakes Garrison Star Wars booth, which normally has some sort of prop for guests to get their picture taken with for a small fee. 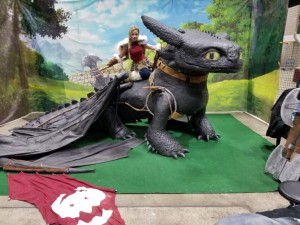 A full size version of Toothless from How to Train Your Dragon will also be featured at the 2017 Grand Rapids Comic Con. The dragon was built by John Marks (Facebook page). Guests can pose on Toothless with full access to Viking props for photos for a small donation to the Make a Wish Foundation.

When asked what he believes fans will get out of the convention, Hodges told us, “Mostly to have a good time and create some good memories with family and friends.” As mentioned above, I will be attending the event with my two sons five and under. Hodges told me there are many kid friendly items like LEGOs, a coloring area, Hot Wheels track, and more. Guests like Tara Sands and Jason Spisak (voice actors) and artists Robert Pope and Christopher Jones are geared towards kids. Hodges also highlights the item my kids are most looking forward to by saying, “There will also be a life-size version of Toothless from How to Train Your Dragon in the vending hall. It’s a good time for kids every day at the Grand Rapids Comic-Con.” 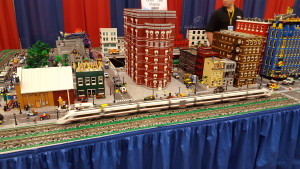 The West Michigan Lego Train Club will provide a 10’x20’ town/train layout of Legos at this year’s Comic Con. The group will also bring a huge assortment of Legos along for children to play with during the convention. I’m already guessing I will be spending a lot of time in this area with my boys.

There is a lot to take in at the Grand Rapids Comic Con, which is why many people will attend more than one of the three days. I encourage first time guests to allow ample time to tour the vendor booths, meet guests, check out panels, and interact with the various cosplay groups/movie props.

All ages will enjoy this family-friendly event that highlights the wonderful world of anime, comics, sci-fi, superheroes, and more. My family is looking forward to seeing Toothless, Groot/Rocket Raccoon, the Legos, Star Wars characters, and the Cosplay Crusaders. 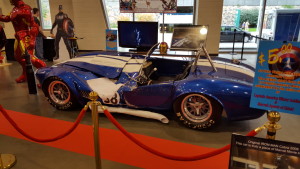