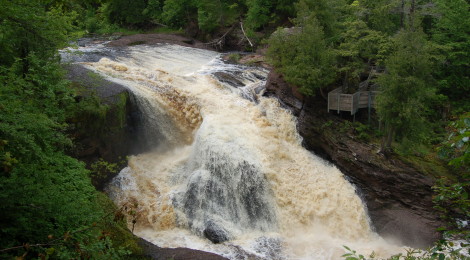 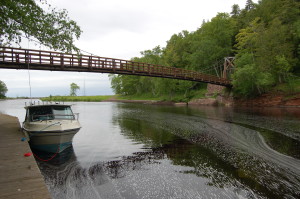 The Black River Scenic Byway is a National Forest Scenic Byway that follows CR-513 for a little more than 11 miles. In that short stretch there are five major waterfalls on the Black River that can be reached by four short hikes, Black River harbor and the road that leads to the Copper Peak ski flying hill. 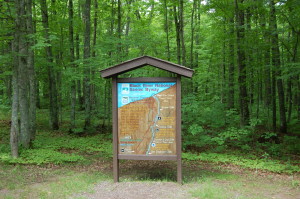 Heading north to Lake Superior, the waterfall parking lots and trailheads are as follows: Great Conglomerate Falls, Potawatomi and Gorge Falls, Sandstone Falls, Rainbow Falls. The last stop is the harbor, where there is a stone pavilion, boat launch, historic Nancy Jean fishing boat and a wooden suspension bridge over the river. The North Country Trail also winds through the area, following the river for a little while and crossing the suspension bridge. 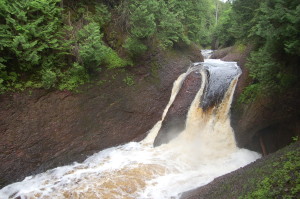 Great Conglomerate Falls is a 20 foot tall waterfall that splits into two sections with a large piece of conglomerate rock in the middle. Potawatomi Falls is a gradual 30 foot drop as the river fans out and then is constricted. Gorge Falls is a scenic 25 foot drop into a gorge that briefly makes the river 10 feet wide. Sandstone Falls is a wide drop of roughly 15 feet, and finally Rainbow Falls is a 30 foot drop that is best viewed from the other side of the river. 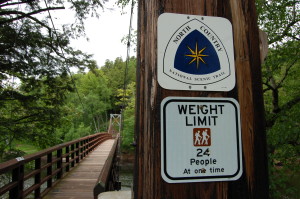 The suspension bridge was built in the 1930s by the Civilian Conservation Corps. It is 210 feet long and designed to sway with heavy loads and wind. It allows the North Country Trail to cross the river and also provides access to a short stretch of Lake Superior shoreline. 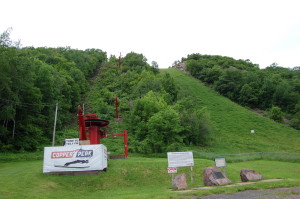 Copper Peak is the world’s largest ski flying hill and it was built in 1969. The hill record is a 518 foot jump in 1994. Plans are currently underway for more future ski flying events at this site. Find out more, including how you can get to the top for amazing views in the summer and fall, at http://www.copperpeak.com/.