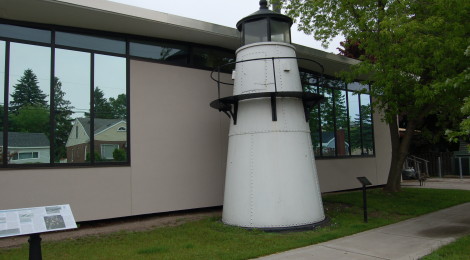 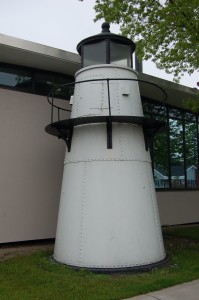 One of the easiest lighthouses to view in the entire state of Michigan can be found in front of the United States Coast Guard station in Sault Ste. Marie, where the Frying Pan Island Light quietly sits alongside historic Water St. The white steel tower capped with a black lantern room is only 18 feet tall, and marked only by a small plaque that has faded quite a bit over the years. Despite the important role it once played in guiding ship traffic on the St. Mary’s River, this light was replaced by a more modern beacon and was brought to its current location in 1988. 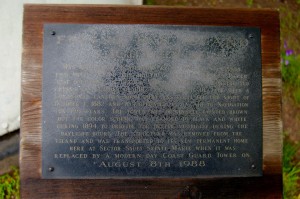 Frying Pan Island is located a few miles offshore from DeTour Village, between the mainland and Drummond Island. The small and simple light went into operation in the 1880s, helping mark the route through the St. Mary’s River and warning of a dangerous shoal in the area. The Frying Pan Island Light served until the 1930s, and fell into disrepair in the years between then and when it was moved to Sault Ste. Marie. As lighthouse enthusiasts we really appreciate that this light is now easy to see and that it was saved from further neglect.

A plaque between the light and the Coast Guard station tells about the history of Sault Ste. Marie and the military, from the construction of the U.S. Army’s Fort Brady in 1822 to the closing of the Kincheloe Air Force Base in 1979. 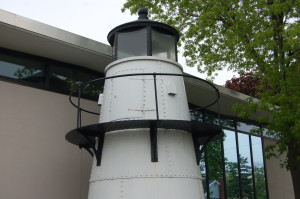 The Frying Pan Island Light is located at 337 Water St. (just east of Brady St.), a block north of E. Portage Ave. You can read more about this light at Terry Pepper’s Seeing the Light website or at lighthousefriends.com.