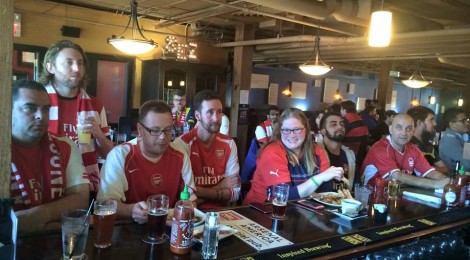 If you’re a fan of world football (that’s soccer to many Americans) and live in Grand Rapids, chances are you’re familiar with the SpeakEZ Lounge. The popular weekend spot is the top destination for soccer fans to catch early morning action from European nations. It’s that dedication to opening doors early and catering to soccer fans of West Michigan that has SpeakEZ Lounge trending in a national soccer pub contest.

NBC Sports is looking for the “Best American Bar” for fans of the English Premier League. SpeakEZ Lounge has been trending in the top ten bars across the country throughout the contest. Voting runs through December 6th to crown a winner. The winning establishment will get $50,000, an exclusive viewing party hosted by NBC Sports, and will be featured in a national commercial.

Fans can vote by using the hashtag #BestPLBarContest and tagging SpeakEZ Lounge in the post. This can be done on Facebook, Twitter, and Instagram. The contest encourages fans to share pictures and memories from the bar and explain why they think SpeakEZ Lounge deserves the title.

The SpeakEZ Lounge opens early on the weekend during the EPL season to give fans access to watching the early morning games. You won’t find this at many bars across the state or country. Seven televisions are available to soccer fans on a first come first serve basis.

Along with watching English Premier League matches, the bar offers viewing of other European Leagues. MLS games and international competitions can also be seen at the downtown Grand Rapids bar. If you’re looking to watch United States soccer matches at SpeakEZ Lounge, plan on getting there early for a capacity standing room only audience.

Manchester United fan and GRFC founding member Rob Shafer said, “I love watching games at SpeakEZ. During the USA matches the amount of people there cheering on our nation is amazing. Watching the EPL is a whole different story though. You get supporters from every team all meshing together for the love of the game. The banter between the fans is fantastic as well.” 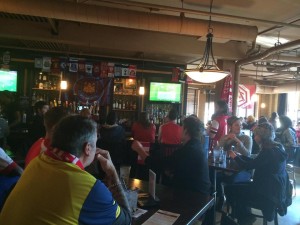 Speak EZ Lounge welcomes fans of all teams and even offers this tagline on their website, “Whether you are a Hammer, Toffee, Gooner, Red Devil, Canary, Baggie, Ranger, Tiger, Saint or Spur or anything else; honest footie fans who appreciate good food and drink and lively discussion of the Beautiful Game are always welcome at SpeakEZ!” 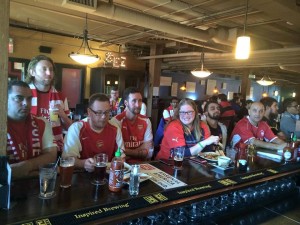 Speak EZ Lounge is the official bar of the American Outlaws Grand Rapids Chapter (US Soccer) and Arsenal Grand Rapids. SpeakEZ Lounge was also a founding sponsor of Grand Rapids Football Club (GRFC). It was conversations held between fans at SpeakEZ Lounge that helped shape the founding of GRFC. The bar hosts many GRFC events throughout the year as well.

SpeakEZ Lounge opened in 2012 replacing the former Cambridge House. You can find the bar at 600 Monroe Avenue in downtown Grand Rapids. The establishment is also known for hosting live music and some of the best food in the city. Lunch specials are offered with decently price half sandwich combinations, served with a soup or salad for $7.50. Twelve craft beers are also offered on tap.

Don’t forget to vote by December 6th to help SpeakEZ Lounge win this national award and bring some love to the city of Grand Rapids. The early success and attendance figures from GRFC are helping to make Grand Rapids stand out as a soccer city.