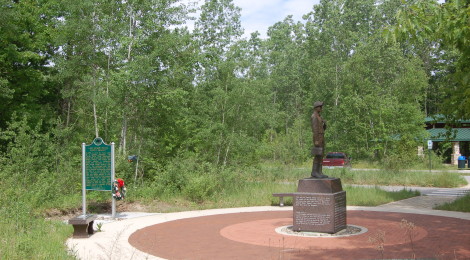 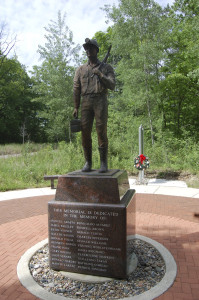 December 11 marks the 44th anniversary of one of the deadliest industrial accidents in Michigan history. 22 men working on a water intake tunnel were killed when a drill bit ignited a pocket of gas causing the explosion. The 30-acre Fort Gratiot Park north of Port Huron features a statue and memorial to those who were killed, and a two-sided Michigan historical marker gives more details about the Water Supply Project and the explosion. The park features a beach, great views of Lake Huron, restrooms, a picnic area, a children’s playground and a walking trail. The marker was dedicated in 2011 on the 40th anniversary of this tragedy, and the statue is a life-size bronze sculpture of a miner with the names of those lost on a plaque.

Only two mining incidents in the Upper Peninsula claimed more lives than the Port Huron tragedy, and Fort Gratiot Park sits almost directly above the tunnel where the explosion took place. The names of the workers killed in the accident: 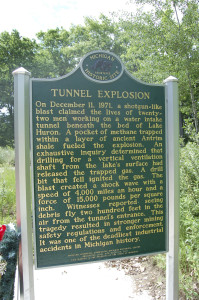 On Dec. 11, 1971, a shotgun-like blast claimed the lives of 22 men working on a water intake tunnel beneath the bed of Lake Huron. A pocket of methane trapped within a layer of Antrim shale fueled the explosion. An exhaustive inquiry determined that drilling for a vertical ventilation shaft from the lake’s surface had released the trapped gas. A drill bit that fell ignited the gas. The blast created a shock wave with a speed of 4,000 miles an hour and a force of 15,000 pounds per square inch. Witnesses reported seeing debris fly 200 feet in the air from the tunnel’s entrance. This tragedy resulted in stronger mine safety regulations and enforcement. It was one of the deadliest industrial accidents in Michigan history. 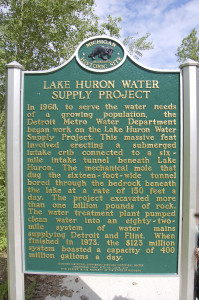 In 1968, to serve the water needs of a growing population, the Detroit Metro Water Department began work on the Lake Huron Water Supply Project. This massive feat involved erecting a submerged intake crib connected to a six-mile intake tunnel beneath Lake Huron. The mechanical mole that dug the 16-foot wide tunnel bored through the bedrock beneath the lake at a rate of 150 feet a day. The project excavated more than one billion pounds of rock. The water treatment plant pumped clean water into an 82-mile system of water mains supplying Detroit and Flint. When finished in 1973, the $123 million system boasted a capacity of 400 million gallons a day.

Fort Gratiot Park is located just off M-25 on Metcalf Rd. Hours are 8 a.m. to 9 p.m. from Memorial Day to Labor Day and 8 a.m. to 8 p.m. in the winter. A 2011 Times Herald piece for the marker dedication did a great job digging deeper into the background of the tragedy and the efforts to put the memorial in place.