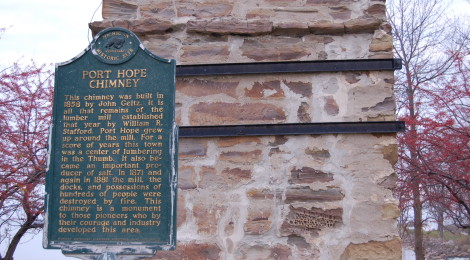 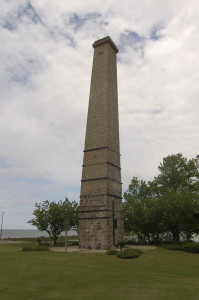 Port Hope is a small town in Michigan’s Thumb region that is home to approximately 250 residents. What it lacks in current population, however, it makes up for in history as this was once the site of a prosperous lumber operation. Visitors today will notice the only surviving chimney from the lumber era, which stands 80 feet tall near the Lake Huron shoreline. The Port Hope Chimney was constructed in 1858 by mason John Geltz.

The area surrounding the chimney is known as Stafford Park, named after the owner of the mill and the founder of Port Hope. In the summer months there is a campground with more than 70 sites, a softball field, a playground, swimming area and fishing opportunities. The address for the park is 4451 Huron. 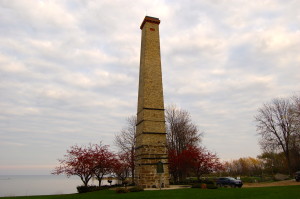 A Michigan Historical Marker has stood in front of the chimney since 1964, and its text reads:

This chimney was built in 1858 by John Geitz. It is all that remains of the lumber mill established that year by William R. Stafford. Port Hope grew up around the mill. For a score of years this town was the center of lumbering in the Thumb. It also became an important producer of salt. In 1871 and again in 1881 the mill, the docks, and possessions of hundreds of people were destroyed by fire. This chimney is a monument to those pioneers who by their courage and industry developed this area.

Other nearby attractions include the Port Sanilac Lighthouse, Point Aux Barques Lighthouse, and the towns of Port Austin and Harbor Beach.