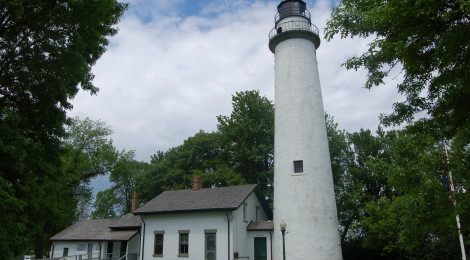 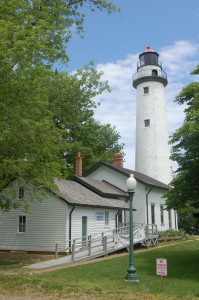 The shoreline of Michigan’s Thumb is marked by many shallow spots, reefs and shoals. Lake Huron had been treacherous for mariners for many years, and one of the lighthouses that was constructed to guide the way was the Pointe Aux Barques lighthouse near Port Hope. The reef at this point extends out for more than a mile and in places the water is only two feet deep. 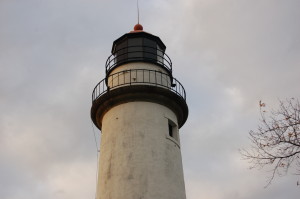 While a lighthouse was constructed here in 1848, it only survived for 10 years due to poor construction and the present structure was finished in 1857. The tower is 89 feet tall and painted white, and has a two-story dwelling connected to it. The tower is capped with a red lantern room, and its light still functions as a navigational aid today. 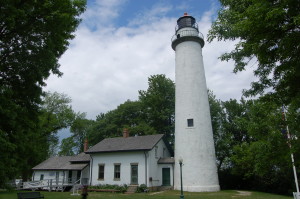 The light was automated in 1958, and today the grounds and buildings are open as a museum. You can find out more at http://www.pointeauxbarqueslighthouse.org/. Exhibits share more information about the Fresnel Lens, Great Storm of 1913, the life saving station that once operated here, and Great Lakes November storms. There is no admission charge to visit this lighthouse but donations are appreciated. In addition to the lighthouse, the grounds include an oil house and the keeper’s dwelling. 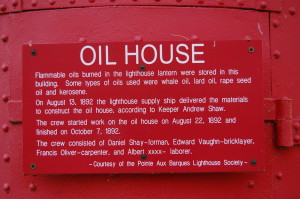 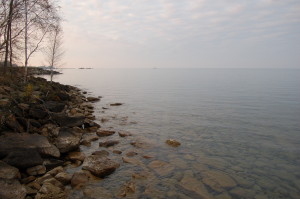 You can find Pointe Aux Barques Lighthouse in Lighthouse County Park, reached by heading north on Lighthouse Rd. from its intersection with M-25 between Port Austin and Port Hope. There is a campground south of the lighthouse and day access to the lake, where it is easy to see how dangerous the shoreline is. The museum is open from Memorial Day to October each year, 10am – 7pm. The Michigan historical marker near the lighthouse shares some details of the families that served here: 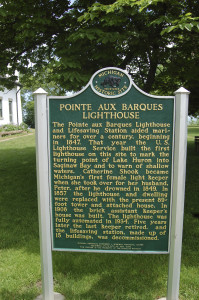 The Pointe aux Barques Lighthouse and Lifesaving Station aided mariners for over a century, beginning in 1847. That year the U.S. Lighthouse Service built the first lighthouse on this site to mark the turning point of Lake Huron into Saginaw Bay and to warn of the shallow waters. Catherine Shook became Michigan’s first female light keeper when she took over for her husband, Peter, after he drowned in 1849. In 1857 the lighthouse and dwelling were replaced with the present 89-foot tower and attached house. In 1908, the brick assistant keeper’s house was built. The lighthouse was fully automated in 1934. Five years later the last keeper retired, and the lifesaving station, made up of 15 buildings was decommissioned. 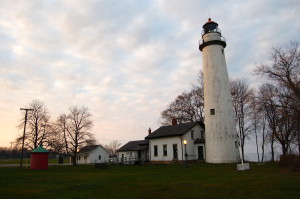