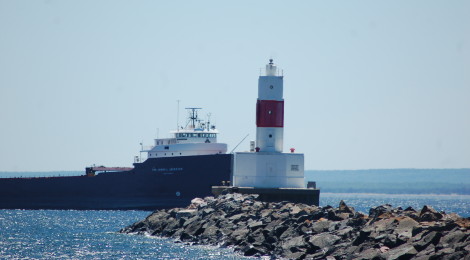 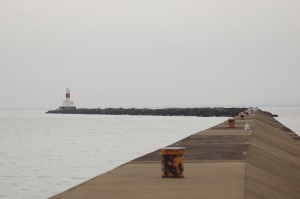 The Presque Isle Harbor Breakwater Light in Marquette, Michigan marks the end of the breakwater at Presque Isle Harbor, where Great Lakes freighters continue to load iron ore at the upper harbor ore dock. While this light may not be one of the state’s most aesthetically pleasing, it is nonetheless and important aid to navigation. It is relatively easy to view this light from Presque Isle Park, and when conditions allow it is possible to walk out on the breakwater (at your own risk) for a closer view of the light or incoming freighters.

The Presque Isle Harbor Light stands 55 feet tall and is painted white with a red stripe in the middle of its upper section. It rest on a rectangular base that has an octagonal concrete base on top of it. From that point the three-story round cylindrical steel tower rises up, and an LED optic light near the top guides ships in and out. 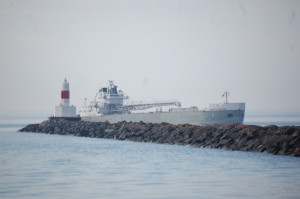 This light was put into service in the 1940s, automated in the 1970s, and still serves as an active navigational aid. When we toured the Marquette Maritime Museum and Marquette Harbor Lighthouse, we learned that Coast Guard personnel stationed at the harbor lighthouse were also responsible for the operation and maintenance of the Presque Isle Light. The Presque Isle Harbor Breakwater Light is stop 15 on our Ultimate Michigan Lighthouse Road Trip: Upper Peninsula. 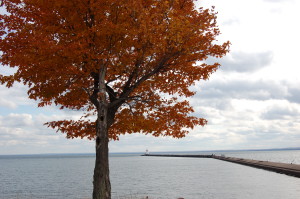 Presque Isle Park is Marquette’s “recreational crown jewel” and in addition to views of the lighthouse and ore dock it offers beaches, rock outcroppings, a scenic drive, foot trails, bike paths, picnic areas and more. From downtown Marquette the best route is to follow Lakeshore Blvd. as it winds along the shoreline. The road becomes Peter White Dr. as it enters the park, and there are plenty of parking spots near the lighthouse overlook and on the road that loops the “island.” Whitetail deer are abundant here, and Presque Isle is also home to more than 100 different plant species. Find out more at http://www.mqtcty.org/parks-presque-isle.php.