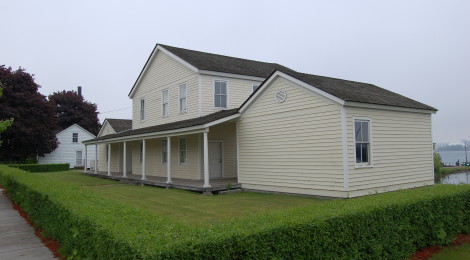 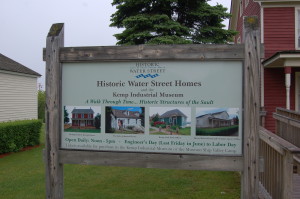 Michigan’s oldest city, Sault Ste. Marie, is home to many historical sites as well as popular tourist attractions. We’ve already shared some of our favorite attractions like the Soo Locks and the Tower of History, and today we will focus on the homes and buildings of Historic Water Street. Located just a few blocks east of downtown and the locks, this collection of four historic buildings includes two of the oldest buildings in the state. From Engineer’s Day (June) to Labor Day each year these historic buildings are open from 12-5 p.m., seven days a week. The museum ship Valley Camp and the docks for the Soo Locks Boat Cruises are located less than a block away. You can learn more about tours and special events at http://www.saulthistoricsites.com/water-street-historic-block/. Below is a list of the buildings and a little bit of background information on each one. 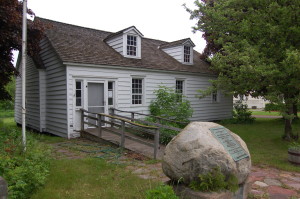 John Johnston House – The Michigan historical marker here provides quite a bit of detail on this historic home: “A native of Ireland and a Protestant, John Johnston (1762-1828) arrived on the Lake Superior frontier in the early 1790’s. He married the daughter of a powerful Chippewa chief and settled here in 1793. Johnston’s knowledge of the Chippewa and the Great Lakes region made him a central figure in the development of this frontier. His original house was a hospitable meeting place for explorers, surveyors, trappers, traders and Indians. Loyal to the British, Johnston aided them in taking the American fort on Mackinac Island in 1812. In retaliation, American troops burned Johnston’s house in 1815. He soon rebuilt it. This surviving portion erected about 1822, in part to house his daughter Jane and her husband Henry Rowe Schoolcraft, is a reminder of Johnston’s pivotal role in the area’s transition from British to American control.” 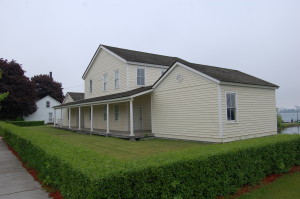 Elmwood/Henry Rowe Schoolcraft House – Sault Ste. Marie’s location on the St. Mary’s River made it an important trade location, which brought Henry Rowe Schoolcraft to the area to help work with Native Americans. “Appointed Indian agent in 1822, Henry Rowe Schoolcraft (1793-1864) requested that the government provide a suitable structure to house the agency. Obed Walt, designer of Michigan’s territorial capitol in Detroit, directed the construction of this building. Nearly 100 feet in length when completed in 1827, the Federal Style building originally had a two story central unit flanked by two single story wings. While at Elmwood, Schoolcraft, explorer and ethnologist, collected materials for his pioneering works on Indian culture which scholars still use. These inspired Henry Wadsworth Longfellow’s Song of Hiawatha. Charles T. Harvey lived here during the mid-1850’s when he supervised the building of the canal and locks at Sault Ste. Marie. Elmwood’s substantial alterations during the past 150 years reflect its varied uses and inhabitants.” 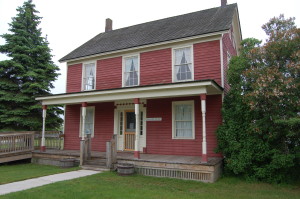 Bishop Frederic Baraga House – We featured this house as part of our post on historic Baraga sites you can visit, as he lived here for seventeen months in the 1860s before the seat of the diocese was moved to Marquette. 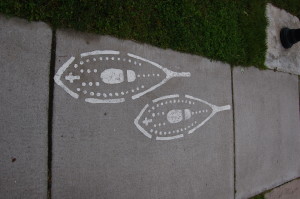 The walking path along the Water St. sidewalk is marked with stenciled snowshoes, a nice tribute to the man known as “the snowshoe priest.” 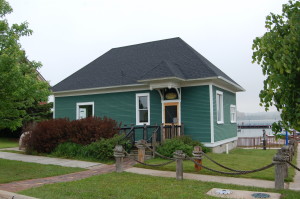 Kemp Coal Dock Office – This building housed the offices of the Kemp Coal Company, which operated in the area until the 1950s. Since 2007 it has been open as the Kemp Industrial Museum, which features artifacts from the early industries of Sault Ste. Marie while also showing how they have adapted and evolved over the years. 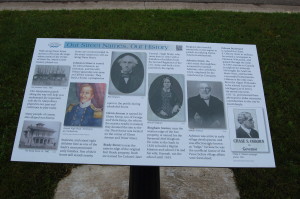 A plaque near the houses features many prominent figures in Sault history, and how the local streets got their names. Johnston, Glenn Kemp, Hugh Brady, Samuel Ashmun and Chase Osborn are all featured. You can find all of these sites in the 400 block of Historic Water Street, east of the Coast Guard Station and west of the Valley Camp. The Frying Pan Island Light is located in front of the Coast Guard station.