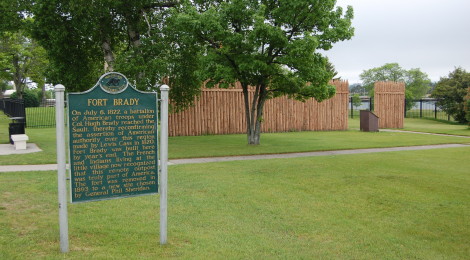 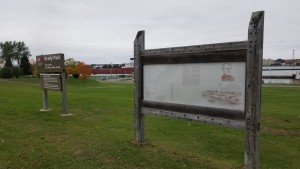 Michigan’s Upper Peninsula is home to many forts, some of which date back to the 1600s. Fort Brady in Sault Ste. Marie was built in the 1820s, to help protect American interest in the area from British incursions from Canada. Fort Brady “was built following the typical plan of a frontier fort. It was surrounded by a picket fence in the shape of a square with two blockhouses placed on diagonal corners. The barracks, hospital, and officers quarters were log buildings surrounding a parade ground.” This fort was located adjacent to the St. Mary’s River from 1822 to 1893, and while nothing remains of the old fort there is a reconstructed wall and several historical markers in place today. When visiting Michigan’s oldest city, this is a great stop to learn about some of its early residents.

The Michigan historical marker at the site of “Old” Fort Brady tells a little bit about its history: “On July 6, 1822, a battalion of American troops under Col. Hugh Brady reached the Sault, thereby reconfirming the assertion of American authority over this region made by Lewis Cass in 1820. Fort Brady was built here by year’s end. The French and Indians living at the little village now recognized that this remote outpost was truly part of America. The fort was removed in 1893 to a new site chosen by General Phil Sheridan.” Another marker on the LSSU campus details the history of “New” Fort Brady: “When Sault Ste. Marie expanded and its canal was widened, the river-front site of Fort Brady was abandoned for a higher, more strategic site selected by General Philip Sheridan. Work began in 1886, and the new fort opened in 1893. From this hilltop, New Fort Brady guarded the copper and iron ore enroute from the mineral regions of western Lake Superior through the St. Mary’s ship Canal. Although never under attack, its troops were called up in 1894 during civil unrest, but primarily they protected the canal until the Second World War, when 15,000 soldiers were stationed here. In 1944 the National Guard assumed these responsibilities and New Fort Brady was closed. Camp Lucas, a small section of the fort was reactivated briefly during the Korean conflict.” 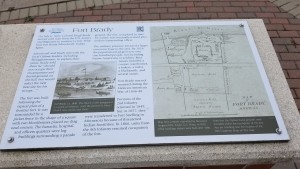 Fort Brady is located on Water St. between Bingham Ave. and Brady St. To the west you’ll find the Soo Locks, and to the east are the Historic Water Street Homes and the Museum Ship Valley Camp.