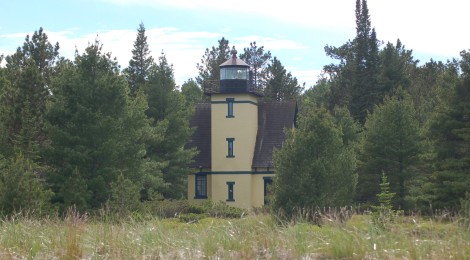 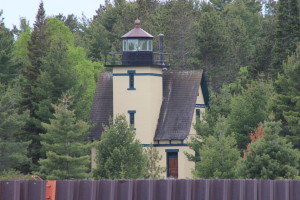 The Mendota Lighthouse was constructed in 1895, replacing an earlier, short-lived structure that was to help mariner navigate the Mendota Ship Canal that connects Lac LaBelle and Lake Superior. The light is also known as the Bete Grise Lighthouse, and while it is now a private residence it can be viewed from the end of Bete Grise Rd. at the ship canal. 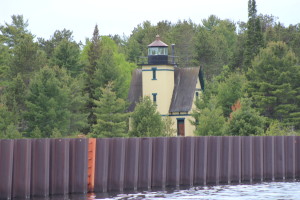 The first light here only lasted a year before it was decommissioned, and it wasn’t until 1895 that the current structure was built to help boats seeking refuge during a storm. The tower is 42 feet tall and rises above a two-story dwelling that is painted yellow with green trim. The light was automated in the 1930s and then decommissioned for good in the late 1950s.

As a private residence it has changed hands a few times, but the recent focus has been on its preservation and the lantern room once again holds a Fresnel lens. The entrance to the canal is now marked by smaller lights as shown below: 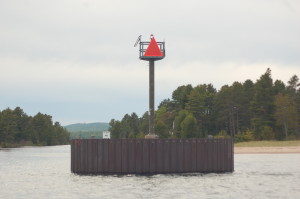 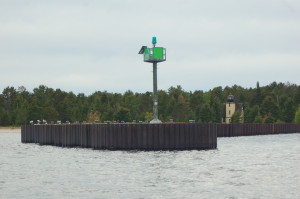 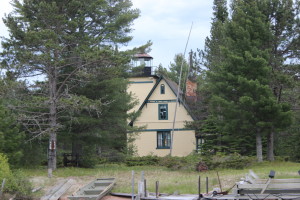 From US-41 between Phoenix and Copper Harbor, take Gay-Lac LaBelle Rd. for a few miles to the bottom of a hill where it forks. Take the left fork (toward Mount Bohemia) and follow it to the lakeshore where it curves and becomes Bete Grise Rd. Follow for about another mile to its end, there is a bit of parking – be sure to follow all posted signs regarding private property. We returned to the area in June 2017 with our kayaks and made the short trip across the channel and out and around the breakwater for some better close-up views of the lighthouse: 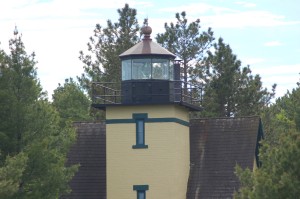 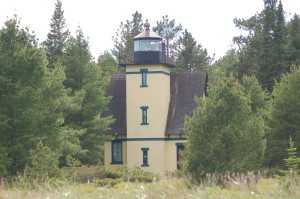 Nearby sites to check out include Haven Falls, the Bete Grise Nature Preserve, Montreal Falls, and the Delaware Mine.