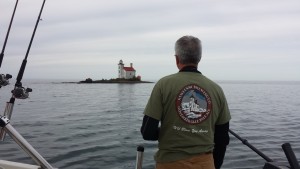 Michigan is home to more than 120 lighthouses, and since we have seen nearly all of the ones that are accessible by land our focus in recent years has turned to visiting the more challenging one on islands in Lake Superior, Lake Michigan, and Lake Huron. As part of our trip to Canada and the Upper Peninsula in June of this year, we booked a charter sightseeing/fishing trip with Sand Point Charters and Captain Brian Helminen so we could see the Gull Rock Lighthouse and Manitou Island Lighthouse. This charter cruise was easily one of the highlights of our trip as Captain Brian and his wife Margaret were friendly and welcoming as well as incredibly knowledgable of the entire area. 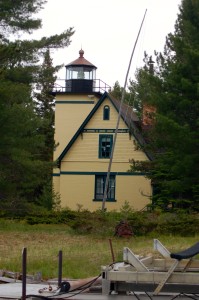 We boarded the 30 foot Fishin’ Mission in Lac LaBelle and headed out to Lake Superior. The first lighthouse we passed was the Mendota (Bete Gris) Lighthouse, which is now a private residence. The lighthouse is yellow with a black lantern room, and a tower that stands 42 feet tall. 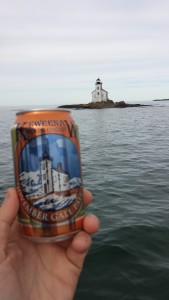 Our first stop was the Gull Rock Lighthouse, a structure that dates back to 1867 and warns of dangerous shoals that claimed at least six vessels in the early 1900s. The brick structure is painted white, with a red roof and a black lantern room atop a 46 foot tall tower. A bald eagle was resting on the roof as we approached. The other surviving building shown in the photos below is the outhouse, which is yellow brick with a red roof. 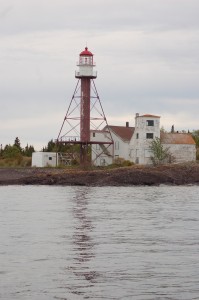 The third and final lighthouse for this trip was Manitou Island Lighthouse, a skeleton tower similar to Whitefish Point Light Station. Manitou Island is three miles from the mainland and roughly 1,000 acres, and its lack of development has made it a popular spot for bird watching, camping, rock collecting and fishing. The lighthouse here dates back to the 1860s, and several of the outbuildings including the keeper’s house still stand. The tower is 42 feet tall. 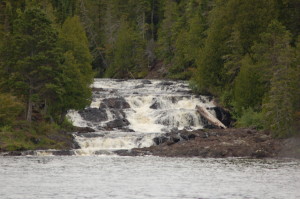 Other amazing views included seeing a quartz vein that runs for 200 feet underwater and then up onto the shoreline, Bare Bluff – a scenic rock formation that rises 600 feet above the lake, and Lower Montreal Falls – a waterfall on the Montreal River that was especially stunning thanks to recent rainfall. We can’t thank Captain Brian enough for taking the time to show us these extra sites. I also got the chance to reel in and land a 10 lb. lake trout near Gull Rock, which was pretty memorable for someone who hadn’t ever fished on the Great Lakes and hadn’t been fishing at all in nearly 20 years. Enjoy the photos below, and be sure to check out Sand Point Charters’ website at http://sandpointcharters.com/ and go like their Facebook page, which is regularly updated with photos and stories from their excursions.