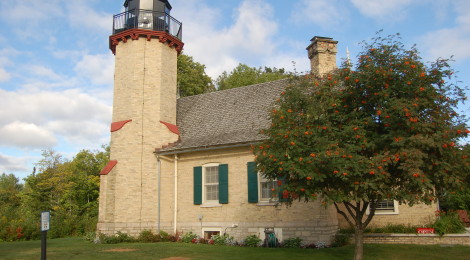 The efforts of the Emmett County Historical Society have returned the McGulpin Point Lighthouse to its past glory, and added another great attraction to the Mackinaw City area. While nearly everyone who visits the straits area is familiar with Old Mackinac Point Lighthouse, the older light to the West had gone unnoticed for years. Built in 1869, the McGulpin Lighthouse’s design would later see lighthouses elsewhere use the same design. After it was deactivated in 1906 it went into private ownership. The lantern room was removed at some point, and I remember the thrill of finally locating the light sans tower on a trip to the area in the early 2000s (I will try to find picture).

In 2005, the property was purchased and work began on restoration. Now, the lighthouse can be entered, the tower can be climbed and nature trails abound. A short trail that leads to the lake starts behind the lighthouse.

Along the way, there are more great views of the lighthouse, a wishing well, and a great deal of flora and fauna. The trail comes out near the rocky shoreline, near a separate parking area for those who choose to bypass the light. Views of the world-famous Mackinac Bridge can be had here, and McGulpin Rock is a focal point of the shoreline.

The rock is about nine feet tall, and was used by French explorers to gauge water levels. It was mentioned on maps dating back to the 1700s, and hopefully it will get some more attention in coming years.

If you’re in the Mackinaw City area and want to make a quick stop at this lesser-known but incredibly worthwhile historical site, take West Central Ave. west through town and all the way to its end in a T intersection with Wilderness Point Rd. Turn right on Wilderness and follow it about half a mile to the lighthouse (on the right) and the rock (end of the road). All told, getting here is only a 2.5 mile trek from downtown.