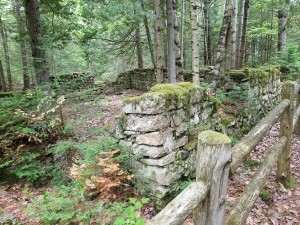 Michigan once had more than 200 lighthouses, and roughly 120 of those structures survive today. We recently had the chance to hike to the ruins of one of the lighthouses that didn’t survive – the Cheboygan Lighthouse Ruins at Cheboygan State Park. Not much remains of the 1859 lighthouse today, but the park has done a great job of preserving the ruins and providing some of the history of the area. The hike out to the ruins is one full of scenic views including the Fourteen Foot Shoal Light, the Mackinac Bridge, the Poe Reef Light, and occasional passing freighter traffic. 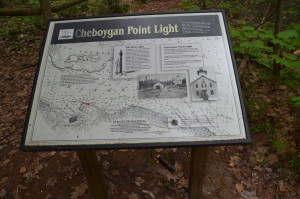 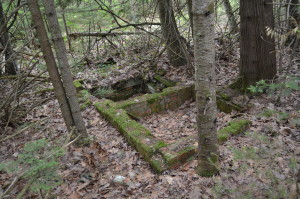 The lighthouse here had a 33 foot tall brick tower, with an attached one-and-a-half story dwelling. A separate building housed a fog signal, and the station also had a boathouse and dock. When the Fourteen Foot Shoal Light was built and put into operation in the 1930s, the Cheboygan Lighthouse was abandoned. The buildings were dismantled in the 1940s and now all that remains are brick foundations. 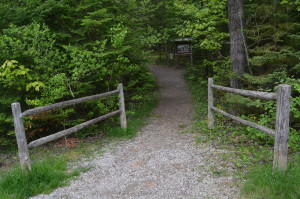 We started on the trail that begins in a day use parking lot off of Seffren Rd. before the campground. After throwing on our mosquito head nets and dousing ourselves in bug spray, we headed into the woods on the Blue Trail. This well-marked and maintained trail led us past the Poe Reef Cabin after roughly a quarter mile, and shortly after that we encountered a junction with the Green Trail. From there, we took the Green Trail to the lake, and followed the shoreline for about a mile to the lighthouse ruins (passing the Fourteen Foot Shoal Cabin along the way). We could see the Poe Reef Light once we reached the lakeshore, and eventually had views of the Fourteen Foot Shoal Light and the Mackinac Bridge. We also watched as the freighter Algoma Enterprise, a 730-foot self-unloading bulk carrier from Canada, passed by. The only better views of these two lighthouses come from lighthouse boat cruises with Shepler’s Ferry out of Mackinaw City. 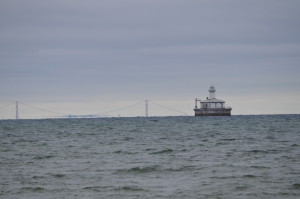 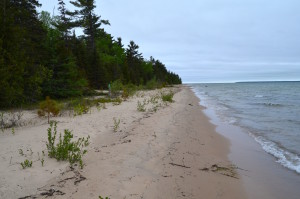 The Cheboygan Lighthouse ruins site is well-preserved and fenced off to prevent further damage. An interpretive sign gives details on the station’s history and explains what some of the structural remains are. In addition to the miles of hiking trails and the two cabins, Cheboygan State Park also has a day-use area and sandy swimming beach and a campground with more than 75 sites. Be sure to also stop by the Cheboygan Crib Light and Cheboygan River Range Light in town, and if your hike made you thirsty we recommend a stop at Cheboygan Brewing Company.