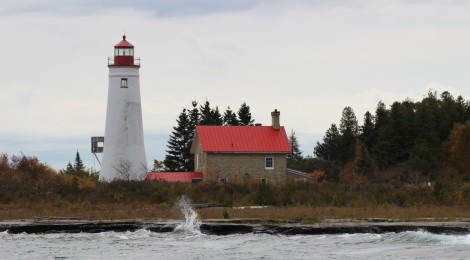 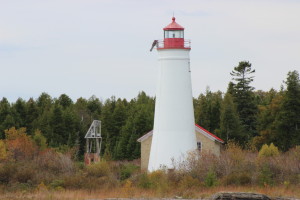 One of the most dangerous places on Lake Huron from the 1840s to the 1960s is Thunder Bay near Alpena, estimated to be home to 100 or more shipwrecks. The Thunder Bay Island Lighthouse is one of several beacons that was constructed in the area to help guide ships through the dangerous water here. Built in 1832, this is one of Michigan’s oldest lighthouses and one of the oldest on Lake Huron. 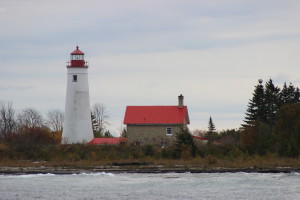 Thunder Bay Island is a 215-acre island in a group of three islands. The lighthouse is on the southeast part of the island, warning of the shallow reefs that surround it. While this island was once home to a thriving fishing community of more than 150 people and 30 boats, all that remains today is the lighthouse and a few outbuildings. 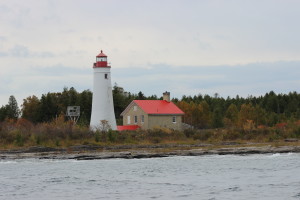 Dating back to 1832, the lighthouse here was the second built on the island – the first one was built a year earlier but did not withstand the elements. Additions to the tower decades later brought it to its current height of 63 feet. The tower is painted white with a red-capped lantern room. The keeper’s dwelling is connected to the tower by a covered walkway and dates back to the 1860s. It is a brick structure with a bright red metal roof. Other structures include a fog signal building near the lighthouse and an abandoned Coast Guard boat house on the opposite side of the island. 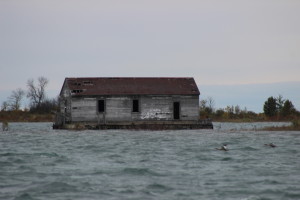 The Thunder Bay Island Lighthouse Preservation Society was formed in 1996 and has managed the property since, making repairs and preserving history. From their website: “We are dedicated to the education, preservation and restoration of Thunder Bay Island and its historic light station The goal of the Thunder Bay Island Lighthouse Preservation Society is the repair, restoration and maintenance of the remaining historic structures on the island. As we do this, we are engaged in gathering documentation of the island and its inhabitants. As we share the information we discover, the public will be able to gain an understanding of, and appreciation for, the valuable maritime history revolving around the island. In December, 1997, the Society and the US Coast Guard signed a ten-year lease for the buildings with an easement to access these buildings. The lease has been extended to 2027, and the society is working in partnership with Alpena Township to gain ownership of the southern portion of the island. Currently, the island is divided between Alpena Township on the southern end, and Bureau of Land Management on the north.  Visitors may join society members on trips to the island to conduct work or research deemed to be part of the TBILPS mission. The long-range plan is for the island to be mapped, interpretive signs to be installed, and clearly delineated paths to be created for self-guided tours.” 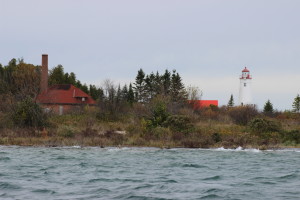 The most recent TBILPS project has been replacing the roof on the fog signal building with a historically correct metal shingle roof. Funds for this project came from the Michigan Lighthouse Assistance Program, which administers the funds raised by the “Save Our Lights” license plates. 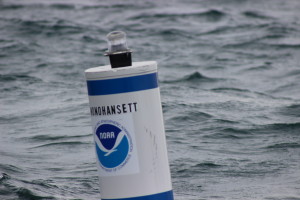 The area near the island is popular with scuba divers and is home to two well-preserved wrecks. The Monohansett was a 160 foot wooden steam barge that sank in 1907. It lies in 18 feet of water and its propeller and shaft are still in place. The James Davidson was a 100 foot wooden bulk freighter that now lies in 35 feet of water off the island’s southern tip. 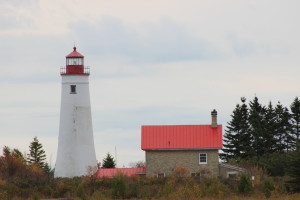 We’d like to thank Russell Katje for sharing these photos from a visit to the lighthouse in October 2015. For those looking to see the lighthouse, the best bets are contacting the Thunder Bay Island Lighthouse Preservation Society (http://www.thunderbayislandlight.org/) or hoping for good luck with an Alpena Shipwreck Cruise (http://www.alpenashipwrecktours.com/), which will sometimes stop by the island and view the wreck of the Monohansett. Thunder Bay Scuba (https://www.tbscuba.com/) supplies divers and can put you in contact with charter boat captains. Be sure to stop at the NOAA Great Lakes Maritime Heritage Center to learn more about the Thunder Bay Marine Sanctuary and all of its shipwrecks.