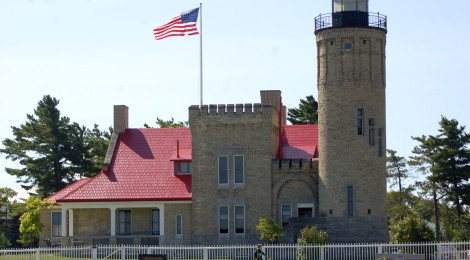 12 Lake Michigan Lighthouses You Can Enter

Michigan is home to more lighthouses than any other state, and some of the best-known of those lighthouses can be found along the Lake Michigan coastline. Famed for its dunes and sandy beaches, Lake Michigan also boasts rough storms and more than its fair share of shipwrecks. Through the efforts of various preservation societies, many of these lights are now open to the public with the ability to climb their towers. Whether its surveying the miles of surrounding dunes from the top of Big Sable Lighthouse in Silver Lake State Park or getting a better view of the Mackinac Bridge from the top of the Old Mackinac Point Lighthouses, here’s a list of 12 Lake Michigan Lighthouses you can enter and some views that absolutely shouldn’t be missed.

Standing guard above the beautiful Silver Lake Sand Dunes, this lighthouse stands 107 feet tall. Only the reddish-brown brick tower remains of what was once a larger complex, and when mixed in with the colors presented by sand, water and vegetation on the grounds it makes for stunning photographs. The Sable Points Lighthouse Keepers Association has helped make this light accessible to the public, and offers the opportunity to climb the tower (adults $3, children $1) from May to September each summer. Visit splka.org for more information.

The crown jewel of Ludington State Park, Big Sable Point Lighthouse’s black and white tower stands guard over a stretch of Lake Michigan that has proven treacherous for mariners over the years. Part of the fun in getting to this lighthouse is a 1.5 mile hike – either heading in from the campground or strolling along the sandy lakeshore. The SPLKA has volunteer keepers at this light during the summer and fall season, and climbing the tower is free of charge (and offers a stunning view) – visit splka.org for more information.

The light at the end of the north breakwater in Ludington is unique in its design, built in a “square pyramidal form” and standing 57 feet tall. The steel-plated tower is white with a black lantern room, and the passenger ferry Badger traveling past is a frequent sight. The SPLKA offers tours from May-Sept each year, more details can be found on their website at splka.org.

This light lies just south of the Sleeping Bear Dunes National Lakeshore, and is a popular stopping point with a sandy beach and stunning sunsets. The tower, white and 37 feet tall, barely stands out above the house itself which makes this structure different than many of its Lake Michigan counterparts yet still ver picturesque. Tours are conducted mostly on weekends in the summer, for an up-to-date schedule check out www.pointbetsie.org.

A scenic drive north on M-37 ends at Lighthouse Park and the Mission Point Lighthouse. After miles of passing wineries, old barns and other scenery along the bay, visitors here are presented with a great panoramic view into the Grand Traverse Bay. The square tower is 36 feet tall and the white color of the entire structure stands out against the greens and blues in the surrounding landscape. The historic Hesler Log Cabin is also located in the park, and the 45th parallel (halfway between the Equator and the North Pole) runs through Mission Point. Hours of operation and fees can be found here.

The crown jewel of Leelanau State Park is the Grand Traverse Lighthouse, which stands guard at Cat’s Head Point. The structure is mainly white, with red and green accents that make its windows and the tower really stand out. This state historic landmark is also on the National Register of Historic Places, and during summer months visitors can climb the 41-foot tall tower. More information available here.

In 2009 the McGulpin Point Lighthouse was opened to the public after restoration by the Emmett County Historical Society. The lighthouse itself guarded the western end of the Straits of Mackinac for decades before the construction of the Mackinac Bridge made it obsolete. The tower was eventually removed after the light was deactivated and for years this was a tough one to find and visit. For a small donation, visitors can now climb the restored tower and enjoy a stunning view of the Straits area, more information here.

Standing guard over a treacherous stretch of northwest Lake Michigan shore, the Seul Choix (Sish-shwa) Lighthouse is a still-active navigational aid that is also open to visitors. Constructed in a style similar to Au Sable Lighthouse on Lake Superior, the 77-foot tall white tower stands tall above an attached dwelling of brick with red roofs. The grounds are also highlighted by several restored outbuildings, and views of freighters loading at Port Inland to the east. The Gulliver Historical Society maintains this light, and offers further details here.

Only the tower remains of what was once a lighthouse similar in style to Sand Point (Escanaba), and it may take quite a drive to reach, but the Peninsula Point Light offers views of Lake Michigan that shouldn’t be missed. There is no staff regularly on hand (site is maintained by the National Forest Service), leaving visitors on their own for self-guided tours of this popular birdwatching area before climbing the 40 foot tall yellow brick tower.

Escanaba has been one of the most important shipping ports in the Upper Peninsula since its founding, and the lighthouse here has helped guide the way since 1868. Visitors can now enter the restored dwelling and climb the 40 foot tall white tower capped with a red roof. Details on hours available at the Delta County Historical Society website.

Possibly the most-visited lighthouse in the entire state, the Old Mackinac Point Light sits next to the Mackinac Bridge in Mackinaw City. Location may be key in why it is often visited, but its picturesque architecture that makes it one of the most photographed buildings in the state. With an almost castle-like feel, the contrast of brick, red roofs and a black-capped tower, this light is definitely a unique one on the Great Lakes. Information on hours and fees available on the Mackinac Parks website here.

Guiding the way from Lake Michigan into White Lake via the White River, this lighthouse is constructed of cream-colored brick with a black-capped tower. The White Lake area was part of a lumber boom, which led to the channel here being dug to expedite the process of exporting wood. This is one of four lights operated by the Sable Point Lighthouse Keepers Association, more details on hours and fees can be found at splka.org.