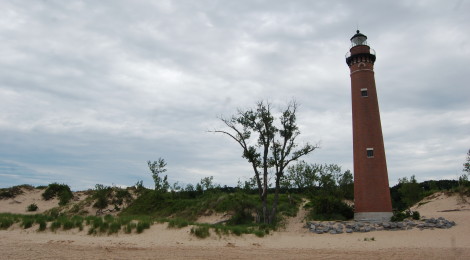 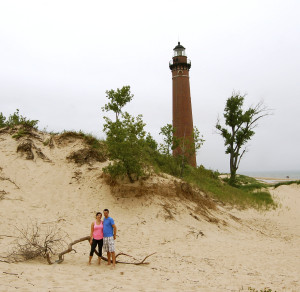 Visitors flock to Silver Lake State Park each year to see the towering sand dunes and the gorgeous Lake Michigan shoreline. The northern section of the park features a campground, ORV area on the dunes, and miles of hiking trails. A smaller, southern section of the park sits on a stretch of Lake Michigan shoreline south of Silver Lake and features one of the tallest lighthouses in Michigan. 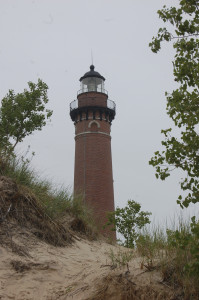 The Little Sable Point Light (or Petite Pointe Au Sable) stands tall above the dunes, coming in at 108 feet tall. There used to be other buildings attached to the light and on the grounds but today only the rust-colored brick tower remains. This has become one of our favorite lights on Lake Michigan because the area is incredibly beautiful yet not overcrowded. 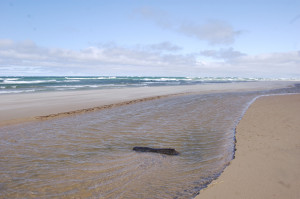 There is a lot of room to explore the dunes and shoreline here, and crowds typically aren’t as thick as they are at Silver Lake itself. The Sable Point Lighthouse Keepers Association has volunteers staffed at the light during the summer, and for a small fee it is possible to climb the tower.

In 2014, a Michigan historical marker was placed at the site and gives visitors a little more background as to why this light was deemed necessary and how its construction came about. 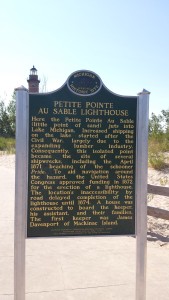 Here the Petite Pointe Au Sable (little point of sand) juts into Lake Michigan. Increased shipping on the lake started after the Civil War, largely due to the expanding lumber industry. Consequently, this isolated point became the site of several shipwrecks, including the April 1871 beaching of the schooner Pride. To aid in navigation around the hazard, the United States Congress approved funding in 1872 for the erection of a lighthouse. The location’s inaccessibility by road delayed the completion of the lighthouse until 1874. A house was constructed to board the keeper, his assistant, and their families. The first keeper was James Davenport of Mackinac Island. 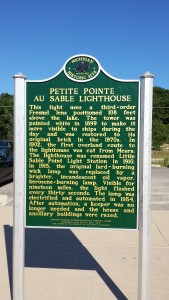 This light uses a third-order Fresnel lens positioned 108 feet above the lake. The tower was painted white in 1899 to make it more visible to ships during the day and was restored to its original brick in the 1970s. In 1902, the first overland route to the lighthouse was cut from Mears. The lighthouse was renamed Little Sable Point Light Station in 1910. In 1915, the original lard-burning wick lamp was replaced by a brighter, incandescent oil vapor, kerosene-burning lamp. Visible for nineteen miles, the light flashed every thirty-seconds. The lamp was electrified and automated in 1954. After automation, a keeper was no longer needed and the house and ancillary buildings were razed. 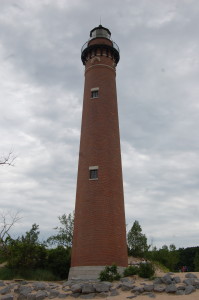 To get to this light, take the Shelby Rd. exit off of US-31 and head west. After almost five miles turn right on 32nd Ave, and 1.5 miles later take a left onto Buchanan Rd. Follow Buchanan to Scenic Dr., turn right and follow to Silver Lake Rd. Turn right on Silver Lake Rd. and follow it to the parking area – this route is very curvy and tight, but well-signed. This is a state park area so a Michigan recreation passport is needed for entry.